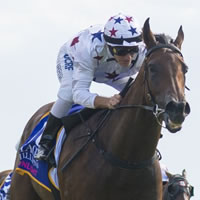 Three of the favoured runners – Sunlight and undefeated colts Ef Troop and Jonker – were involved in the incident about 200m after the start but it was the Victorian filly the stood up best, powering away to score by two lengths over Stuart Kendrick’s 100-1 outsider Fullasaboot (Sepoy x Fullazz).

McEvoy said the decision to campaign Sunlight in Queensland – the filly won two races on the Gold Coast after a debut defeat at Flemington in November – was the hallmark of Saturday’s victory.

The veteran horseman, who combined with Aquis Farm and Blue Sky Bloodstock to purchase Sunlight for $300,000 at last year’s Magic Millions Gold Coast Yearling Sale, parted with $600,000 to secure her full sister at the sale on Friday.

“It’s a big thrill and it’s brilliant for our brand, what a great filly,” McEvoy said.

“The key was getting her here when we did, she’s been able to acclimatise and handle the heat really well.”

“Having the preparation where she ran up here last week, when the high pressure was on today she lifted late.”

The win was bolstered by the fact Sunlight is owned entirely by female connections, who secured an additional $325,000 as part of the Magic Millions’ Racing Women promotion.

It was the third time the winner of the 2YO Classic picked up the Racing Women bonus with this year’s $1.525 million winners’ cheque the biggest in the 32 year history of the Magic Million 2YO Classic.

The victory gave Currie another feature scalp for McEvoy – the pair boasts a 15% winning strike rate over the past two racing seasons – and the Group 1-winning jockey again praised the stable’s preparation of the filly.

“She came here with the weight of expectation today and she’s proved all of her fans right,” Currie said.

“She’s been expertly trained by Tony to bring her up here early and give her those couple of runs.”

“I learned a lot getting beat on her in her first start, probably more than what I have in her past two wins.”

“I rode her down the straight and held her up a bit and I just think she’s too brilliant for that and she’s proven that in her last couple.”

Jonker’s race was all but over after Hugh Bowman was forced to severely check the colt to avoid running into the inside rail, with the colt finishing a distant last while Ef Troop led into the straight but was a spent force at the 200m, tiring to finish fourth, three lengths adrift of Sunlight.

The 2018 Magic Millions 2YO Classic final field finish can be found below.