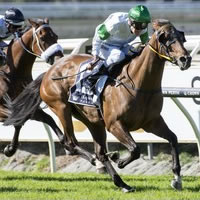 Magnifisio led home a clean sweep for Western Australian gallopers when she scored a career high victory in yesterday’s Group One $750,000 Winterbottom Stakes (1200m) at Ascot.

Coming with a well timed run under leading Perth rider Jason Brown, Magnifisio reeled in the fancied eastern staters Moment of Change and Angelic Light to hit the front at the furlong marker before holding out the locals Waterman’s Bay, Shining Knight and Testamezzo.

The win was the 12th in 22 starts for the beautifully bred daughter of Magnus and sent her earnings soaring to $1,194,100.

Winning trainer Jim Taylor was all smiles after the race, praising the daughter of Magnus for her tenacity.

“It’s a big thrill,” Taylor said. “I didn’t think we could win from that barrier with all the good horses from the east drawing well.”

“It was a great ride from Jason to get her one off the fence after a couple of hundred and she did the rest.”

Jockey Jason Brown also heaped praise on the daughter of Magnus in giving him and Taylor two wins in the state’s big sprint in three years after the success of her close relation Barakey in 2012.

“She’s so tough and honest and she gives you everything when she goes out,” Brown said.

Magnifisio was purchased by senior part owner Alan Macalister for $80,000 at the 2011 Magic Millions Perth Yearling Sale from the draft of Rangeview Stud.

She is the pin up performer from three runners for the 100 per cent winner producer Ifestio, a stakes winner herself of the listed Belmont Oaks.

Ifestio, a daughter of Key Business, is from the Group Two winning Key Dancer mare Dance Hi and at the time of Magnifisio’s sale she was also the dam of the group winning Love a Dane mare Hi on Love.

Another of Dance Hi’s progeny, a Key Business youngster had shown loads of talent early in his career and while unraced looked an exceptional talent for the Jim Taylor stable.

That horse, a full brother to Magnifisio’s dam Ifestio, would turn out to be barnstorming sprinter Barakey – currently the winner of 13 races including the 2012 Winterbottom Stakes and earnings of over $860,000.

Barakey was being set for the Winterbottom again this year but injury forced the hand of connections to miss the race and the Taylor and Brown focus switched to Magnifisio.

Racing’s newest millionaire with earnings of over $1.1 million is now a valuable broodmare prospect for the Macalister family and connections will now look an eastern state campaign with a crack at Flemington’s Newmarket Handicap at her pet trip of 1200 metres on the radar.

Coming off an eye catching second at big odds in the Fairetha Stakes on November 8, Rommel proved too strong in the feature event for three-year-olds.

Rommel was ridden to victory by one of Neville’s three jockey sons, Steven and started at $21 with bookmakers in a great result for Santo Guagliardo’s Ridgeport Syndicate.