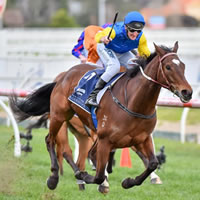 Western Australian bred and owned star Black Heart Bart added a second win at racing’s elite level when he stormed to victory in the Group One Memsie Stakes (1400m) at Caulfield.

A Group One winner over 1200 metres at his previous preparation, Black Heart Bart will now be aimed at the weight-for-age championship of Australasia where he could face Australia’s best, Winx.

Black Heart Bart’s connections are keen for trainer Darren Weir to aim the gelding at the Cox Plate in October and the master trainer said he would give his latest star every opportunity to get there.

Jockey Brad Rawiller was able to give the popular elect a lovely run in transit and after switching to the outside of runners shortly after straightening the result was never in doubt.

“It couldn’t have worked out any better,” Rawiller said post-race. “This horse was first up today and he’s got a different sort of a preparation this time.”

“Wow… when I let him down he was awesome,” Rawiller added.

Black Heart Bart, sent out the even money favourite with bookmakers, cruised home to beat Rising Romance ($17) by a length and a quarter, while fellow Magic Millions graduate Mahuta ($8) was brave, finishing third, two and a quarter lengths further back after racing on a hot speed.

“He’s been a great horse for the stable,” a delighted Darren Weir said. “I’ve got to thank the owners – Kim and the crew for sending him over to us.”

“He’s a pretty straight forward horse to train and that’s the way he races. He gives his all and it was a great win today.”

“The plan was to be either one, one or one, two – he landed in the one, two with the hot speed. He built into it great and I loved the way he went through the line.”

“The owners are very keen to go the Cox Plate so we’ll follow a path to that. Kim (Renner, part owner) said if you’re not happy along the way and you want to deviate, we’re happy with that.”

He was offered at the 2012 edition of the auction and was purchased by senior part owner Kim Renner from the draft of Lakeside Thoroughbreds for $20,000.

As it stands his incredible record reads out at 13 wins and 11 placings from just 32 starts and earnings of over $2.28 million.

A winner of the Group One The Goodwood in Adelaide at his last preparation before a gutsy second in the Stradbroke Handicap, Black Heart Bart is one of the country’s most talented and consistent gallopers.

He proved his class in Perth early in his career when he won a string of feature races including the Group Two Lee Steere Stakes among eight black type success in his home state.

Black Heart Bart is one of three winners produced by the city winning At Talaq mare Sister Theresa, a winner of six races from 1000 to 2100 metres.

One of her daughters, the unraced Falbrav mare Rebel Sister is the dam of Perth based stakes winners Rebelson and Rebel King.

Earlier in the day the Peter and Paul Snowden trained Redzel carried the Triple Crown colours to success in the Group Three The Heath Stakes (1100m).

A $120,000 Gold Coast Yearling Sale purchase from Marquee Stud, Redzel was able to hold out Stradbroke Handicap winner Under the Louvre to win by a long neck under jockey Mark Zahra.

By Snitzel and from the stakes winning and good producing mare Millrich, Redzel boasts the record of four wins and three minor placings from 11 starts and earnings of over $320,000.

A last start winner at the track, Ocean Embers flew home late in the colours of trainer Shea Eden to beat Thames Court by a half length.

Ocean Embers, a daughter of ill fated sire Beneteau, was purchased for $23,000 from the draft of Cornerstone Stud (as agent for Arrowfield Stud) at the 2014 Adelaide Yearling Sale at Morphettville.

With four wins from just seven starts, Ocean Embers has her connections celebrating again – her earnings now soaring to over $215,000.