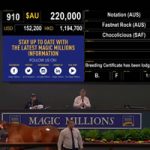 Impressive Fastnet Rock filly Notation notched her third win from just six starts at Canterbury earlier this month before heading to the Magic Millions Sale ring at her next outing.

The three-year-old stepped out this week at the 2019 Gold Coast National Broodmare Sale selling for $220,000.

The filly heads to the Canberra stables of Matthew Dales in search of black type.

Notation began her career with wins at Geelong and Cranbourne last October under the guidance of David & Ben Hayes & Tom Dabernig at Lyndsay Park in Euroa.

Following her two victories, she stepped up to listed class in the Desireable Stakes (1400m) at Flemington, finishing just over 5 lengths from the winner after leading.

It was a respectable effort in her first attempt at stakes level. Placings at Moonee Valley and Flemington followed in December before she took a well earned rest.

Notation resumed successfully at Canterbury on May 19 where jockey Blaike McDougall always had her placed to advantage.

It was a stylish victory for the daughter of Group 1 winning South African bred mare, Chocolicous, suggesting a promising campaign ahead.

A smaller stable in new surroundings may see Notation writing a winning script.

We’ve raced horses with Donna, and her husband Rob, and they’re Love by name and lovely by nature.

We wish them all the best with Notation in future racing endeavours.

If you’d like your very own Notation, then keep an eye out her full brother heading to the sales early next year.

Check out the Notation sale at magic Millions.