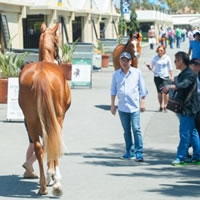 The Magic Millions Gold Coast 2YO Sale is fast approaching and will take place over two days next month on the Gold Coast.

Past graduates of the Magic Millions Gold Coast 2YOs in Training Sale have been flying around the world as attention is about to turn to the 2016 edition of the auction.

The recent run of success is a great pointer with this year’s sale set to be conducted by Australia’s leading thoroughbred auctioneers on October 11th and 12th.

Last Saturday graduates of the sale excelled in Singapore with two winners and a further two placegetters at Kranji.

These winners followed in the hoofsteps of quality youngster Mystic Master who won the Juvenile Championship at Group Three level at the same track.

The winning streak has continued in Macau with a string of victories over the past week headlined by Macau Derby winner The Alfonso.

This follows the recent Queensland Winter Carnival where former graduate Cradle Me swept a pair of feature events for two sets of connections. Sovereign Nation, Fontelina and Hooked are among other recent group winners at a domestic level.

All indicators suggest the catalogue for the 2016 auction this October is the best quality catalogue assembled in history.

The breeze ups for the sale will commence with a session at Seymour in Victoria on September 16. There are also two sessions at the Gold Coast (September 19th and October 10th) and another at Warwick Farm (September 20th).