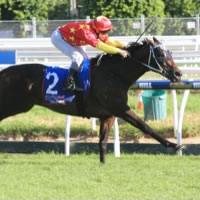 Star galloper Dissident was crowned the Victorian Racehorse of the Year at that state’s annual awards night where the state’s best achievers were recognised.

A four time Group One winner during the 2014-15 racing season – Dissident achieved three of them in Victoria to claim the state’s highest racehorse honour.

From seven starts in the state, Dissident scored three wins and three placings, all at Group One level. His victories came in the Memsie, Makybe Diva and CF Orr Stakes’.

Dissident was purchased by his trainer Peter Moody for $210,000 from the Widden Stud draft at the 2012 Magic Millions Gold Coast Yearling Sale.

He was recently retired to stud to stand his debut season at Newgate Farm, with the race record of seven wins and eight placings from just 21 starts and earnings of over $2 million.

Not only is Dissident himself a graduate of the Magic Millions Gold Coast Yearling Sale – his stakes performing sire and dam, Sebring and Diana’s Secret, were also sold through the same sale ring as yearlings.

Meanwhile, outstanding mare Royal Descent showed she was on track for a big spring campaign with a barnstorming first up win in Saturday’s Group Two Warwick Stakes at Randwick.

A member of the all conquering Chris Waller stable, Royal Descent sat just off the speed before producing a powerful sprint in the straight to reel in the leaders and race away for a soft win.

Royal Descent is a graduate of the 2011 Gold Coast Yearling Sale.

She returned to Baramul Stud after failing to reach her reserve of $350,000 in a stroke of luck to her breeder Gerry Harvey.

Since then the daughter of Redoute’s Choice and stakes winner Mulan Princess has established herself as one of the stand out race mares in the country – a consistent performer at the elite level around the country.

As a three-year-old she scored one of the easiest Group One wins ever on a Sydney track when she strolled away from Dear Demi and others in the Australian Oaks at Randwick.

While she hadn’t won since she had been a placegetter numerous times at Group One level – in a George Main Stakes twice, Doncaster Handicap twice, Epsom Handicap and Queen Elizabeth Stakes. She was also fifth, just 1.8 lengths from the winner, in a Caulfield Cup.

As it stands Royal Descent boasts the record of five wins and 12 placings from 26 starts and earnings of over $2.4 million.

One of the few mares who could challenge Royal Descent as Australia’s most valuable broodmare prospect is Amicus – an impressive first up winner of Saturday’s Group Three Toy Show Handicap at Randwick.

A winner in the spring of the Group One Thousand Guineas at Caulfield, Amicus lead home a Magic Millions quinella finish when she over powered Echo Gal in an impressive racetrack return.

She was purchased by Waller for $500,000 at the Gold Coast Yearling Sale having been one of the most admired fillies at that 2013 auction. Bred by Tony Santic’s Makybe Racing and Breeding outfit in Victoria, Amicus was sold through the draft of Tyreel Stud.

Amicus could head back to Melbourne and may have her next start in the Let’s Elope Stakes.