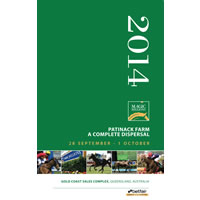 Check out the online catalogue for the Patinack Farm Complete Dispersal Sale here.

The first day of the auction will be made up of race fillies and mares and broodmares and include no fewer than 76 stakes performers including 12 Group One winners.

The additional lots to the Patinack Farm offerings include group winners Believe’n’succeed (dam of G1 winner Bounding in foal to Street Cry) and Se Sauver (served early this season by Fastnet Rock in first season at stud) and imported stakes winner Kathern’s Cat. There are also five young yearlings to be offered by Rothwell Park.

The Patinack Farm Complete Dispersal Sale joins the country’s best performing breeze up style auction, the Magic Millions Gold Coast 2YOs in Training Sale which will be held as scheduled on September 30th.

The original catalogue of 217 lots has been boosted by five supplementaries from Patinack Farm – colts by Casino Prince, Husson and Onemorenomore and fillies by Lope de Vega and Murtajill.

To view the updated online catalogue for the Gold Coast 2YOs in Training Sale click here.