The Slipper fits for unbeaten Vancouver 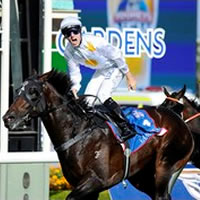 Vancouver confirmed his status as Australia’s best juvenile with a dominant win in Saturday’s $3.5 million Group One Golden Slipper Stakes (1200m) at Rosehill.

In front of a crowd of almost 20,000, Vancouver raced home under Tommy Berry to emerge was one of the hottest sire prospects in the world with a famous victory.

The Medaglia d’Oro colt extended his unbeaten run to four and had favourite punters cheering when he led home stablemate English in the world’s richest two-year-old race.

The win was the sixth in the race for champion trainer Gai Waterhouse and saw her join her legendary father Tommy Smith as the most winning trainer in the show piece event.

Vancouver extended the outstanding record of Magic Millions graduates in the Golden Slipper. Of the last 12 Slippers to be offered as yearlings, nine of them were sold at the Gold Coast.

Waterhouse, in partnership with Sydney based bloodstock agent James Harron, took a shine to Vancouver when he was offered for sale by Coolmore Stud at last year’s Magic Millions Gold Coast Yearling Sale.

The colt headed to Waterhouse’s stable after the successful $185,000 bid at the Gold Coast.

Of Waterhouse’s six Slipper winners – five were purchased from the same sales ring at the Magic Millions – the other was a homebred.

“He’s a dominant colt and he took it out today, very exciting,” Waterhouse beamed. “He’s just a joy to train.”

Waterhouse said the colt had many similarities to former stable champion Pierro and he could be given his chance to follow in the hoofsteps of him by tackling the remaining two legs of the Sydney juvenile triple crown.

“We’ll let him go home and eat his dinner,” she said. “One thing we know about Vancouver is he is a winner.”

“The win was a triumph for champion jockey Tommy Berry, his first as a father, with his son Kaiden in the mounting yard.”

“He had them covered easily today,” an emotional Berry said. “He’s a pleasure to ride and I can’t thank Gai enough.”

“I said he’d win the Slipper and then he’ll go on to the Sires and the Champagne by further. I’ve got one right, I hope I’m right about the other two now.”

“I’ve got no words. One of my best memories on a racetrack was winning it last time with my brother Nathan by my side and I’m so thankful that he’s looking after me today.”

“I’ve got my son here, Kaiden, one person leaves you in the world and another comes along. I’m just so blessed to have my family here.”

Bred by John and Deb Camilleri of Fairway Thoroughbreds, Vancouver is one of 10 winners from the 100 per cent winner producer Skates.

A daughter of Danehill, Skates was a Melbourne winner at two and earned black type with three listed runner-up placings including two at two (Cinderella Stakes in Adelaide and Debutante Stakes in Melbourne).

She was also second in a William Crockett Stakes at Moonee Valley at three.

Skates is from Skating, a multiple Group One winner by At Talaq, who sadly died at Segenhoe Stud in the week leading up to the Slipper.

The win capped a great day for Gai Waterhouse and James Harron – they also purchased Sweet Idea who earlier in the afternoon won the Group One Galaxy Handicap under Blake Shinn.

Sweet Idea, a graduate of Arrowfield Stud by Snitzel, was also purchased from the Gold Coast Yearling Sale – she cost $240,000 and the valuable mare has already earned over $2.4 million.