Rock awesome at the Valley as Cox Plate start beckons 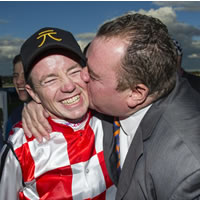 An outstanding first-up Group 2 victory by Awesome Rock at Moonee Valley on Saturday has him on a Cox Plate path for the spring.

The quality entire cemented his place in the field for Australasia’s weight-for-age championship after he scored a brilliant win in the Dato’ Tan Chin Nam Stakes (1600m).

One of five Magic Millions graduates to win stakes events on the day and the third on the Moonee Valley card, Awesome Rock guaranteed himself a place in the field for October’s WS Cox Plate.

Prepared by father-son training partnership of Leon and Troy Corstens, Awesome Rock was able to slide through the field under Stephen Baster before bursting to the front in the straight and racing away for a classy win.

Hitting the line and booking the Cox Plate run, Awesome Rock ($31) held a two length margin over Real Love, while Set Square was a further three parts of a length away in third place.

Co-trainer Troy Corstens couldn’t hide his delight – beaming in the winner’s stall with connections who had the chance to celebrate a deserved big race success.

The entire was first past the post in March’s Group One Australian Cup, only to lose the race in the stewards room. No one could begrudge him and his connections this Group Two feature.

“He won an Australian Cup,” Corstens said. “It got taken of us I know, but he’s got the ability there.”

“We’ve had him (entered) in the Cox Plate the whole way along. He needed to do something like that for us so we could take the next step up and say, righto we can have a real crack at it.”

“The goal posts have changed a bit now. We were thinking the Mackinnon (Stakes), but we’ll probably switch it back to the Cox Plate, have a crack and see how we go.”

“He’s gone from being a boy to turning into a man and I think doing something like that he can show what he’s got,” Corstens added.

Awesome Rock has always been a great looker. Bred by Western Australians Alan and Sue Olive, he was sold by Newgate Farm at the 2013 Magic Millions Gold Coast Yearling Sale.

The son of Fastnet Rock caught the eye of many good judges at the Gold Coast and in the end it was the $575,000 bid from Melbourne based syndicator Brad Spicer that got the colt.

Hailing from the family of quality sires Dr Devious, Royal Court, Shinko King, Archway and Suzuka Phoenix, Awesome Rock has now earned over $688,000 from his 21 runs.

Awesome Rock’s dam Awesome Planet, a daughter of Giant’s Causeway, was a quality performer – twice a listed winner in New Zealand she crossed the Tasman to win the Group Three Doomben Roses in Brisbane. She was Group One placed also in New Zealand.

Wild Rain will take on superstar sprinter Chautauqua and fellow globetrotting star Buffering at Group One level after another feature win, this time in the Group 2 McEwen Stakes (1000m).

A winner of the Group Three Sir John Monash Stakes at her previous start, Wild Rain proved too fast for her rivals, leading from barrier to box in a dominant length victory over Furnaces, while warm favourite Heatherly was a fraction further back, third.

A brave runner-up in January’s $1 million Magic Millions Sprint at the Gold Coast, Wild Rain will now head to the Group One AJ Moir Stakes at Moonee Valley.

“I was a bit surprised to see her in front today because I thought this was going to be blistering pace and I thought she was going to get a good drag.”

“She can run those sectionals which makes it hard for the others to pick her up.”

“She’s been very consistent, she’s been a great money spinner and she’s a Group Two winner now. She’ll be back for the Moir!”

A $150,000 purchase for Kavanagh from the Arrowfield Stud draft at the 2013 Magic Millions Gold Coast Yearling Sale, Wild Rain has boosted her earnings to over $750,000 from just 19 runs.

A daughter of Manhattan Rain, Wild Rain is one of two stakes performers for the Adelaide winning Rory’s Jester mare North Flower – a mare who hails from the family of Horse of the Year Northerly.

North Flower, who is also the dam of Gosford Guineas placegetter Flowerchild, is a sister to stakes winners Canon Song and Duchess Katrin and three quarter sister to North Boy and Northern Song.

Merriest burst into the stakes winner’s list at the Valley when she proved a touch too good for WA’s reigning juvenile champion in the listed Atlantic Jewel Stakes (1200m).

In a thrilling finish it was the Danny O’Brien trained filly who did best, proving a touch too strong for the previously unbeaten Whispering Brook in an all Magic Millions finish to the race named in honour of one of the best fillies to have emerged from the Gold Coast.

“She was very good at her first start in a race,” O’Brien said. “And then she didn’t have any luck first up at Caulfield the other day.”

“Today Damien (Oliver) was able to get her up on the pace and she showed plenty of fight.”

O’Brien said he would give the daughter of Denman every opportunity to get to the Group One Thousand Guineas (1600m) at Caulfield in next month.

“She settles on the speed and relaxes in the run. So we’ll probably try her over 1400 (metres) in the Guineas Prelude and that will give us a good idea.”

Merriest was a $210,000 purchase for her owners Barry and Jan McRostie from the Newhaven Park draft at the 2015 Magic Millions Gold Coast Yearling Sale.

The pin up performer to date for her dam, the Moonee Valley winning Canny Lad mare Merrier, Merriest has already earned over $120,000 and her residual value rose considerably.

Foxplay emerged as another top prospect for the spring’s fillies features when she stormed home for the most impressive of wins in the Group Two Furious Stakes (1200m) at Randwick.

Carrying the famous purple and white starred colours of Star Thoroughbreds, Foxplay showed a great turn of foot in the straight to reel in Bacarella before clearing away to win by almost two lengths.

It was a performance that impressed her rider Hugh Bowman and also champion trainer Chris Waller.

“I thought she was going to run a very nice placing,” Waller said. “But to reel in the leader like that, it was a very big effort.”

“She’s done everything right this filly,” he added. “She will definitely go to the Tea Rose (Stakes) in two weeks time.”

A daughter of Newgate Farm sire Foxwedge, Foxplay is one of three named foals for the 100 per cent winner producer Butters.

A three time winner by El Prado, Butters was a stakes winner of the Sweepida Stakes at Stockton before being exported to Australia as a broodmare.

As well as Foxplay, Butters is the dam of the Sydney winner Butterboom and three time Singapore winner Exciting Prospect.

A $160,000 purchase for Denise Martin at the 2015 Magic Millions Gold Coast Yearling Sale, Foxplay is a winner of two and twice placed with earnings of over $200,000 already.

The winning streak of Magic Millions graduates on a big day extended across the Tasman when the listed Wanganui Guineas turned out a rib tickling finish between a couple of Gold Coast purchased products.

Highlad, a National Yearling purchase, and Manhattan Street, a National Weanling buy, went to the line locked together with the former getting the result by a breath.

Highlad is trained in partnership by Andrew Forsman and Murray Baker and was purchased for $90,000 by leading New Zealand agent Paul Moroney at the 2015 Magic Millions National Yearling Sale from the draft of Coolmore Stud.

He was sent out one of the two fancied runners in the Guineas after an impressive debut win. He’s now won both his starts for connections.

One of 84 individual stakes winners for champion international sire High Chaparral, Highlad is the first stakes performer for My Lady’s Chamber.

A daughter of Arena, My Lady’s Chamber won the listed National Sprint at Canberra and among her seven stakes placings was a runner-up effort in the Group One Flight Stakes.