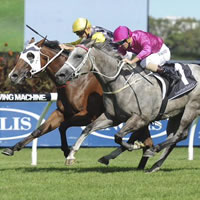 Outstanding mare Catkins capped a big 24 hours for Magic Millions graduates when she notched her 13th win in the Group Two Breeders Classic at Rosehill on Saturday.

Sent out the favourite at her first start since a brave third in the Group One Myer Classic, Catkins edged out the beautifully bred Lilliburlero to win the Sydney feature.

Trainer Chris Waller said the brave five-year-old would be given another chance to win her first Group One race but it wouldn’t come in the Coolmore Classic.

“I think we broke her heart last year in the Coolmore with 59kg against good horses,” Waller told reporters.

“I’m not going to make the same mistake so the Queen of the Turf Stakes will be the target and then a freshen up towards the Tatts Tiara.”

Catkins, a daughter of champion international sire Dubawi, was purchased by Ingham Racing for $85,000 at the 2011 Magic Millions Gold Coast Yearling Sale from the draft of Amarina Farm.

With 13 wins and 10 placings from just 28 starts, Catkins has won nine stakes races, been three times Group One placed, and earned her connections over $1.37 million.

Top Cranbourne sprinter It is Written kicked away the weekend in style when he scored a deserved and emotional win for trainer Robbie Griffiths in the listed Abell Stakes at Moonee Valley on Friday night.

A son of Written Tycoon, It is Written notched his 10th win and third at stakes level when he went back to back in the feature sprint event. It gave the Griffiths stable something to smile about after losing the emerging youngster Burnstone earlier in the week.

A $45,000 purchase for connections from the Riva Ridge Stud draft at the 2010 Magic Millions Adelaide Yearling Sale, It is Written was narrowly beaten at his previous start in the Group Two Australia Stakes at the same track.

The good looking Written Tycoon gelding is one of four winners produced by his dam, the lightly raced Danehill Dancer mare Winning Team.

The son of Blackfriars accelerated beautifully in the straight when asked by jockey Glenn Smith and he was able to hold out quality Melbourne bound sprinter Watermans Bay.

Trainer Vaughn Sigley said Black Heart Bart will most likely start next in the $120,000 Pinjarra Classic before tackling the Bunbury Stakes in March.

Meanwhile, the Magic Millions National Weanling Sale was in the spotlight on Saturday with a black type double achieved by graduates Sacred Star and Lady Jivago.

Sacred Star made it back to back Group One wins in New Zealand on Saturday when he scored a strong win in the NRM Sprint (1400m).

A $90,000 National Weanling graduate from Kulani Park, Sacred Star is a son of Flying Spur and he follows in the hoofsteps of the likes of Pierro, Driefontein, Zoustar and Peggy Jean who are all recent sale graduates to win at Group One level.

Lady Jivago earned valuable black type when she made it two wins from as many starts when she won yesterday’s feature juvenile at Rosehill in Sydney.

A daughter of Beneteau, Lady Jivago was purchased for $20,000 from the 2013 National Weanling Sale when offered through the draft of Bellerive Stud.

Entries are now open for the 2015 Magic Millions National Sale – including the weanling sale – for more information and to enter click here.