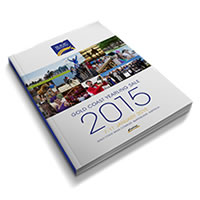 The 2015 Magic Millions Gold Coast Yearling Sale has attracted a star studded catalogue with close relations to many of the country’s best gallopers to go under the hammer early in the New Year.

The catalogue for the first five days of the sale has been released and is now available for viewing online and also for download on the Equineline Catalog App for iPad.

The sale will commence on January 7 with the first foal of group winning mare Valentine Miss catalogued as the first lot, one of 42 lots for Widden Stud at the Gold Coast auction.

Leading trainers, owners and bloodstock agents are set to converge on the Gold Coast as they hunt for the next Dissident, Amicus, Shooting to Win, Atlantic Jewel, Zoustar, Pierro, Boban or Almalad.

“Last year’s auction was a resounding success with increases across the board and a clearance rate of almost 90 per cent,” Magic Millions Managing Director Vin Cox noted.

“We are confident prospective buyers will give our 2015 line up a great endorsement at the sale in January.”

Among the well related lots in the 2015 catalogue are (at least half) relations to Group One winners including:

Star racemares represented by yearlings in the catalogue include Group One winners:

Some 274 lots in the catalogue are from stakes performed mares – 166 of them stakes winners prior to retiring to stud. 86% of yearlings catalogued are BOBS Eligible, while other Breeder Bonus schemes are well represented.

Plenty of interest will surround the progeny of 22 individual first season sires including:

The leading sires ranked by representation for the sale are:

In all there are some 92 individual sires represented in Books 1 and 2 of the auction.

Australia’s leading breeders and have supported the sale strongly with the leading vendors by draft size headed by: