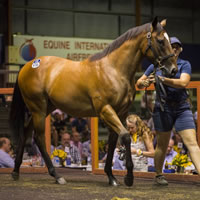 The Magic Millions Gold Coast Yearling Sale has smashed all records for its Book One auction with previous benchmarks obliterated during the action packed four day event.

A filly by Snitzel became the ninth individual lot to sell for $1 million or more when she was knocked down to New South Wales trainer Mark Newnham during the night session for $1.1 million.

She was the standout performer on Day Four and helped elevate the 2018 Magic Millions Gold Coast Yearling Sale as the highest ever grossing yearling auction in Southern Hemisphere history.

Presented by Arrowfield Stud, as agent, the filly attracted a flurry of bids before Newnham traded blows with David Lucas of Phoenix Thoroughbreds to secure the much admired youngster.

“That’s the one we were waiting for for the last three days,” Newnham said. “It’s nice we were able to get her.”

“She just looks a natural. She’s got a really good, strong pedigree behind her and you’d nearly give up if she couldn’t run.”

“We thought she’d be pretty dear – for us she was the best one here. You’ve got to pay for them.”

“This is the first time I’ve gone past half a million (dollars),” Newnham added. “That’s how much we liked her, so hopefully she can repay us.”

No fewer than five other yearlings sold for over $500,000 during an action packed sale closer for Book One of the country’s most popular auction.

As is usually the case, the Magic Millions Sales Complex attracted thousands to the Saturday night session with a great buzz from the first lot to last.

The Book One sale rounded out with a gross of almost $156 million – over $22.6 million higher than last year. The average soared to exactly $228,000 while the clearance rate was a record equalling 89 per cent.

“The previous record was back in 2008. It’s been a wonderful sale and it’s a wonderful result for Magic Millions and obviously a massive result for our breeders.”

“A lot of people came to town to support us. Many of the breeders brought us their best horses to support us and I guess in a way the perfect storm was created – everyone played their part and played it very well.”

“We’re in a wonderful position being the number one sales company in the Southern Hemisphere for a while now and with this sale being as strong as it is, really gives us a great platform going forward to attract even better horses and quality buyers,” Cox added.

Former Gold Coast Yearling Sale purchase Snitzel edged out I Am Invincible as leading sire by average (for three or more lots sold), while James Harron Bloodstock was leading buyer and Arrowfield Stud (by gross) and Yarraman Park Stud (by average) led the way for the vendors.