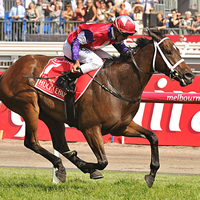 Hucklebuck capped a memorable carnival for the South Australians and crowned the Adelaide Yearling Sale as the Flemington Carnival number one when he led home a Magic Millions clean sweep in Saturday’s Group One Emirates Stakes (1600m).

In winning his second group race for the week Hucklebuck elevated the Adelaide Yearling Sale to the only auction in the world to provide multiple Group One winners over the famous four day Melbourne Cup Carnival at Flemington.

The first Group One winner for his sire Elvstroem, Hucklebuck was the stand out from a memorable carnival for Phillip Stokes with him finishing locked with Chris Waller for races won. Impressively all three of his Emirates Stakes Day runners won.

It also followed on from the success of other South Australian trainers during the week including Paul Beshara, Tony McEvoy and Mick Huxtable.

“The South Australian horses punch above their weight all the time,” Stokes said. “It’s wonderful.”

“To get a Group One in Melbourne is unreal.”

Stokes took a shine to Hucklebuck at the 2012 Magic Millions Adelaide Yearling Sale and went to $50,000 to secure him from the draft of Squillani Park.

“He had a deep girth, a lovely horse,” Stokes said of Hucklebuck as a yearling. “I trained his mother and she had ability. That’s why we looked at him.”

With eight wins and two placings from just 13 starts, Hucklebuck has built up an impressive record.

He has also developed into an incredible money spinner for his owner, Macau Jockey Club Executive Director and Chief Executive Thomas Li, with over $1 million in earnings.

Saturday’s Emirates Stakes was the second victory in the week for the classy galloper following his win in the Group Three Yellowglen Stakes on Derby Day.

Hucklebuck is from the Adelaide winning O’Reilly mare Kondari, a half sister to stakes winners Kalamata and Kirvinsky. Kalamata in turn is the dam of the group winning Adelaide sprinter Stirling Grove.

He is catalogued as lot 351 and will attract attention in the Vinery Stud draft.
Hucklebuck completed a winning stakes double for Adelaide Yearling Sale graduates when he won the Emirates.

A $40,000 purchase for his Murray Bridge based trainer Mick Huxtable, Lord Aspen was sent out the favourite for his first interstate run after three impressive wins from as many starts in South Australia.

By Happy Trails’ sire Good Journey, Lord Aspen was bred by Sandra and Malcolm Hale in South Australia and sold through the draft of Cornerstone Stud at the 2013 Adelaide Yearling Sale.

“He was just a lovely type of horse,” Huxtable told reporters when asked about the purchase of his stable star.

“I fell in love with him when I saw him.”

Huxtable said the promising galloper could run in this weekend’s Sandown Guineas before going for a break.