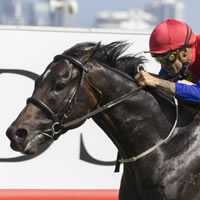 Greg Hickman and Corey Brown combined for the biggest payday in Queensland racing history on Saturday when Pierata justified his short quote to win the $2 million Gold Coast Magic Millions 3YO Guineas (1400m).

The three-year-old picked up $1.2 million for his devastating win on Saturday and an additional $500,000 bonus for claiming Racing Queensland’s Summer Crown after feature wins at Doomben last month.

Saturday’s Guineas victory came courtesy of a brilliant steer from Corey Brown who, after settling in a three back position on the fence, plotted an inside path to victory over the final furlong of the race.

The colt, sent out a $2.80 favourite by punters, scored by nearly two lengths on the line from a gallant Goodfella (Snitzel x Movie), with Calculated (So You Think x Calchris) a further length away in third.

Hickman, who paid $160,000 for the son of Pierro, out of November Flight, at the 2016 Magic Millions Gold Coast Yearling Sale, was both delighted and relieved with the victory and predicted further improvement from Pierata over the coming 12 months.

“It’s such an achievement to be able to do this, we’ve been up here for eight weeks and the horse hasn’t put a foot wrong.”

“Corey’s got a big opinion of him, he’s stuck with him for four runs and he’s justified everyone’s faith in him today.”

“He’ll improve again, next preparation you’ll see a nicer horse again, that’s the scary thing about it, he’s just go so much improvement.”

The win continued an incredible season for the reigning Melbourne Cup-winning jockey who said he was thrilled to claim a second Magic Millions Guineas, more than a decade after piloting Tippitaka to victory in 2005.

“He jumped really well and I could’ve box seated him but I think he’s a better horse when you ride him a little bit quieter and his turn of foot is unbelievable,” Brown said.

“The heavens opened upon straightening and it just allowed him the dream run through.”

“I don’t mind a bit of pressure, especially when you’re riding good horses like this.”

The 2018 Magic Millions 3YO Guineas final field finish can be found below.