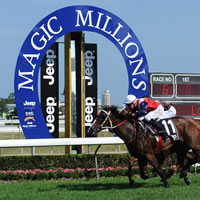 First entries for the Jeep Magic Millions 2YO Classic ($2 million plus $500,000 Racing Women’s Bonus) and the Gold Coast Magic Millions 3YO Guineas ($2 million) to be run on Saturday 9th January were released today.

A total of 789 first entries were received for the renowned 2YO Classic from 161 individual trainers or nominators, including 53 from Gai Waterhouse, 37 from Chris Waller, 31 from Peter & Paul Snowden and 30 from Brisbane’s premier trainer Tony Gollan.

Amongst the nominations was the recent Breeders’ Plate quinella in Capitalist and Detective, as well as Conchita and Criquette, who both won impressively on debut in Sydney and Brisbane last weekend.

Australia’s first lady of racing Gai Waterhouse was again represented with the highest number of horses, with 48 first entries including this year’s Golden Slipper winner Vancouver.

First acceptances and/or late entries for both the 2YO Classic and 3YO Guineas races are due on Friday 4 December, whilst first entries for the other seven races on the program close on Tuesday 29 December.

The Magic Millions Raceday is the centrepiece of the Queensland Summer Racing Carnival which begins at Doomben on 14th November with the running of the Listed Keith Noud Quality Handicap (1200m).