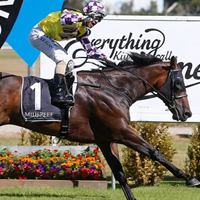 In scoring a breakthrough success, Sacred Star become the fourth individual Group One winner for the 2010 National Weanling Sale at the Gold Coast following in the hoofsteps of Aussie stars Pierro and Driefontein and former kiwi Southern Lord.

The five-year-old gelding settled off the speed in the feature and came with a blistering turn of foot when called upon by jockey Vinnie Colgan when entering the straight.

No sooner had Sacred Star hit the front, he had raced clear of his rivals and led home Designated Driver by four lengths, while third placegetter Trepidation was another three quarters of a length back in third place.

The Telegraph was the first start for Sacred Start after a fruitless New Zealand spring campaign of three starts which followed a Queensland campaign which netted the Magic Millions QTC Cup and a start late an unlucky fifth from a wide gate in the Stradbroke Handicap.

Flying Spur has produced no fewer than 957 individual winners of over 3,200 races and 93 stakes winners.

His last ever yearling to go under the hammer did so at the recent Gold Coast Yearling Sale – a filly from Corumbene Stud (ex Inchita) selling to South Africa’s Adriaan Van Vuuren for $150,000.