Flood hits Ballarat racecourse to bring in the 2015 Jumps Season 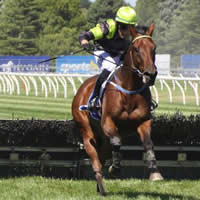 As the sun beamed down on the Ballarat racecourse yesterday, there was certainly no threat of rain, but a flood of a different kind would descend on the Dowling Forest track to claim two of the first three races on the opening day of the the 2015 jumps season.

Marlo Man was under pressure on the turn but he responded strongly under the urgings of Flood to defy all challengers in the run to the line.

The 6yo son of Elvstroem found plenty in the run home to win by four lengths from favourite Red Eye Special with the well fancied Rabbuka holding on for third.

In was a bit more straight forward for Flood on the locally trained trained Beer Garden in the third race, who engaged in a thrilling two-horse duel with the odds on favourite Valediction.

Flood stalked the Gai Waterhouse trained Valediction throughout the race and sent Beer Garden to the lead around the final bend before going on to score a comfortable two and three-quarter lengths win.

Valediction battled on strongly to hold down second place, with Platinum Snip finishing 11 lengths away in third spot.

In a very exciting finish Resetable was strong to the line and looked to have the race won in the shadows of the post, before Singersongwriter ground him down late to score a narrow victory.

Yolanda Be Cool finished a close-up third and there was little between the three horses as they crossed the line.

We are in for a very entertaining jumping season if yesterday’s racing is any guide, especially with the added excitement of Rick McIntosh calling from the stands.

The Ballarat Turf Club are racing again tomorrow Thursday 12th March 2015 where the $50,000 Porter Plant Cup is the feature race of the day.

Jumps racing returned for the 2015 season at Sportsbet-Ballarat yesterday