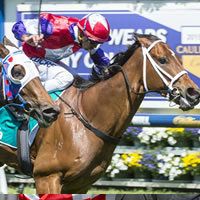 Bargain buy Eclair Choice was on Saturday night crowned the South Australian Horse of the Year at the TRSA Industry Awards at Morphettville.

Trained during the 2015/16 racing season by Phillip Stokes, Eclair Choice proved one of the country’s most consistent gallopers.

From Stokes’ Morphettville base he swept two Group Twos in Melbourne – the Caulfield Sprint (in a dead heat) and the Linlithgow Stakes.

A son of California Dane, Eclair Choice is now in Singapore and he will run in tomorrow’s Sing-G3 Jumbo Jet Trophy at his second run in that country.

Eclair Choice, a graduate of Newhaven Park, is one of the great value stories of the turf. He cost his owner Thomas Li just $5,000 at the 2012 Magic Millions National Weanling Sale.

As it stands he’s won about $500,000 from just 20 starts. That figure looks destined to climb as he settles into Singapore and races into the future.

The SA Horse of the Year award is the second in a row for a Thomas Li owned galloper trained by Stokes.

At the same function 12 months ago his Group One winner Hucklebuck received the major gong.

Hucklebuck, a $50,000 Magic Millions Adelaide Yearling Sale purchase, showed he was on track for a good spring campaign with a solid barrier trial win in Adelaide on Friday.

Stokes won the Metropolitan Trainer of the Year award to cap another successful awards night for the stable.

One of the night’s other major awards – the John Letts Medal was a historic result with a tie between Jason Holder and Jamie Kah.