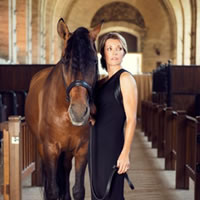 Edwina Tops-Alexander, one of the best show jumping riders in the world, has been announced as the 2015 Magic Millions Racing Women Ambassador.

The role was a natural fit given Ms Tops-Alexander’s Australian origin and the increasing profile of the Magic Millions Racing Women (MMRW) initiative which promotes and champions the role played by women in the multi-faceted sport of thoroughbred horse-racing..

Ms Tops-Alexander will join Zara Phillips MBE, Patron of MMRW, to draw awareness to women’s roles in the racing industry as part of the 2015 Jeep Magic Millions Carnival.

For the past five years, Ms Tops-Alexander has regularly been ranked as the highest female show jumping rider in the world. She is consistently a leader on The Longines Global Champions Tour, the world’s premier five-star show jumping event, which ranks her against both male and female competitors.

Impressively, she is the only rider to have won the coveted Global Championships Tour crown on multiple occasions. Currently, Ms Tops-Alexander is the only female ranked in the top 10 on the tour this season.

Ms Tops-Alexander expressed how delighted she is to be involved in promoting the Australian horse racing industry on a global level.

“I am thrilled to be involved in the 2015 Jeep Magic Millions Carnival alongside co-owners Gerry Harvey and Katie Page-Harvey.”

“I have seen first-hand the fantastic opportunities the horse industry can offer women, so it is a pleasure to support Katie Page-Harvey in her vision to educate and encourage Australian women to further explore the many ways they can achieve success across this sport.”

“My personal experience has seen me grow up around horses and get involved in show jumping from a young age – borrowing my neighbour’s horse until I convinced my parents to eventually buy me one.”

“Winning the Australian Young Riders Championship in 1995 was a game changer for my career and prompted my move overseas.”

“Subsequently, show jumping has taken me all over the world and opened doors to countless opportunities. I look forward to inspiring other Australians to get involved in this diverse industry and make their mark.”

“We are delighted to name Edwina as our 2015 Racing Women Ambassador. She is a salient example of the heights women can reach in the industry.”

“She is truly impressive. In a sport that allows women and men to compete on equal footing, she was the first rider to amass over €1million in prizemoney in one Global Champions season.”

“Edwina complements the integrity of Zara Phillips, our patron, and Francesca Cumani who will be joining us again in 2015 as a racing expert.”

“All three are exactly the type of women who will inspire and encourage others to follow in their footsteps – they really demonstrate the breadth of opportunity this industry offers.”

“In only two years of Magic Millions Racing Women, we’ve seen over 200 two-year-olds, either all-female owned or leased, involved in the incentive bonus and we are expecting an even greater result next year.”

“I have no doubt Edwina’s attendance, along with Zara, will raise awareness for this initiative internationally and continue to help the event grow.”

“I look forward to welcoming Edwina to the Gold Coast in January for one of the most highly anticipated events on the Queensland calendar,” said Ms Stuckey.”

“To attract an elite equestrian athlete of Edwina’s calibre further cements the carnival’s international status as a pre-eminent thoroughbred sales and racing event.”

“Edwina’s role as Ambassador will garner international attention, bolstering the Gold Coast’s reputation as a premier event and holiday destination.”

“The Queensland Government’s 20-year plan for tourism, Destination Success, outlines the importance of supporting events such as this which drive visitation to Queensland’s world-class destinations.”

Edwina spoke exclusively to Australia’s Marie Claire Magazine from the Longines Global Championships Tour in Chantilly, France about what it means to her to be an Ambassador of the Jeep Magic Millions Carnival for the magazine’s November edition, which appeared on news stands on Thursday 2nd October 2014,