Dean Yendall accepts ‘The Don Challenge’ at Warrnambool May Carnival 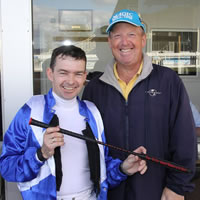 When we were looking for a jockey to help us raise money for the National Jockeys Trust during the three-day Warrnambool May Carnival, there was only one man for the job in our eyes, Dean Yendall, or as we like to call him, the ‘Bradman of the Bush’.

‘The Don’, as he is becoming affectionately known, is a perennial winner on the country racing circuit and he currently leads the overall Victorian Jockey’s Premiership on 108 winners for the season, with 101 of those in the country.

Dean’s career highlights include guiding Niwot to victory in the 2011 Lexux Stakes, before running eighth aboard the same horse in that year’s Melbourne Cup.

We’ve seen Dean’s winning ways first hand ourselves, as he’s ridden multiple winners on horses we own with ATB, and he quickly became a punter’s pal for this particular owner, winning at good odds with great regularity.

We caught up with Dean last week at Ballarat races and asked him if he would take up ‘The Don Challenge‘ in an attempt to raise money for the National Jockeys Trust during the three-days of the Warrnambool May Racing Carnival.

All he had to do was ride as many winners as he could over the three days and we would donate $100 to the National Jockeys Trust for each winner.

Dean happily accepted and ‘The Don Challenge’ was on.

For each winner Dean Yendall rides on the Tuesday, Wednesday and Thursday of the 2015 Warrnambool May Racing Carnival we will donate $100 to the National Jockeys Trust.

Here are Dean’s current rides over the three days.

Good luck Dean in ‘The Don Challenge’ and here’s hoping he can ride plenty of winners during the Warrnambool May Carnival to raise as much money as possible for a very worthy cause.

Feel free to give ‘The Don’ your support during the next three days via our Facebook page here, and via the Twitter hastags #TheDonChallenge and #bradmanofthebush.

Dean Yendall can be found on Twitter via the @Yendall21 user name.