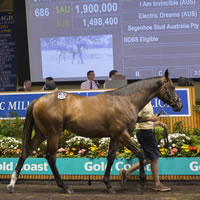 Five individual lots sold for $1 million or more during a stunning day’s selling on Day Three of the 2018 Magic Millions Gold Coast Yearling Sale on Friday.

For the second straight day it was a colt by leading Yarraman Park based sire I Am Invincible who was on top of the leaderboard.

This time it was Segenhoe Stud Australia’s colt from Electric Dreams who was the day’s top seller when he was purchased by James Harron for $1.9 million.

The colt, who hails from the family of Group One winners Grand Armee, Drum, Dealer Principal and Anamato, is a half brother to the group winning juvenile Broadband.

“He’s a very, very special colt,” Harron noted. “He has lots of quality.”

“He’s as good an I Am Invincible colt as I’ve seen, in my opinion. He’s very precocious and an incredible look. He has an intelligent head and he handled the sale brilliantly well.”

“He suits what we’re trying to do and I think he will fit in nicely to our model,” Harron added.

After buying Thursday’s top selling colt (I Am Invincible x Tai Tai Tess) for $2 million, the partnership of Reg Inglis, Jon Kelly and Paul Frampton stepped in to snare the top priced filly so far for the auction when they purchased Sweet Idea’s sister for $1.8 million.

The filly, consigned as Lot 733, was presented by Arrowfield Stud and is also a full sister to this season’s Bill Stutt Stakes winner Showtime and half sister to crack Asian galloper Rush.

“She has terrific residual value as a broodmare,” Kelly said. “She is potentially a blue hen – that’s as good as you can get.”

“I didn’t think (the price) was going to be that high but stuff has changed here today – the prices have gone up and the clearance rate has gone up.”

Flower purchasing the colt in conjunction with B K Racing and Breeding and trainer Brad Widdup.

A colt by I Am Invincible, the quality individual was offered by Vinery Stud on behalf of breeder Greg Perry.

“I Am Invincible is in the top few sires – you’ve got Snitzel, Fastnet Rock and I Am Invincible – they’re making big money, we saw the other one make $2 million (day two),” Flower said.

“His athleticism and the way he was, he was a stand out for us.”

“He’s out of a really good Commands mare. Obviously he’s very well related and he was the one for us,” Flower added.

Commanding Jewel, who like her outstanding half sister Atlantic Jewel, was a graduate of the Gold Coast Yearling Sale – purchased by Spicer Thoroughbreds before winning at Group One level and ultimately retiring to stud.

James Harron secured the Pierro x Dance Card colt from Bhima Thoroughbreds for $1.05 million, while James Moore stepped in to buy the Redoute’s Choice x Cat by the Tale colt for $1 million from Arrowfield Stud.

The clearance rate has continued to grow over the sale and now sits at an outstanding 88 per cent.

“It was quite spectacular. We thought we might have got one or two, but five is just a massive result for us.”

“The depth of the sale is fantastic as evidenced by the figures,” Cox added.

To see the results and to make an offer on a passed in lot click here.