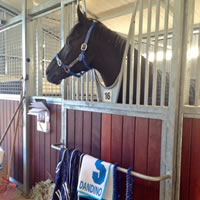 Everything is ticking over nicely for Dandino as he prepares for another tilt at the Caulfield Cup, a race he finished a gallant runner-up in last year before finishing an unlucky fifth in the Melbourne Cup.

The Australian Thoroughbred Bloodstock UK based stayer arrived at the Werribee Quarantine Centre on AFL Grand Final day, along with stablemates Seismos and Guest Of Honour, much to the delight of his many ATB owners, some who were there on the day to greet his arrival, complete with Chardonnay in hand.

As a part owner of this seasoned traveller, affectionately known as the ‘Black Beast’, it was fantastic to see him arrive in such great condition following his long flight to Australia from the UK.

Just like last year, he was accompanied by Marco Botti Head Lad Paul Francis, one of the most likeable Englishman you will ever meet.

“I don’t know who’s more excited to be back in Australia more, me or Dandino,” Paul said.

“He just seems to come to life when he gets out here and could not be happier with him.”

The confirmation earlier this week that premier jockey Craig Williams would ride Dandino in both the Caulfield & Melbourne Cups was another tick for the son of Dansili’s chances this spring.

Craig was aboard the Marco Botti trained Dandino when second in the Caulfield Cup last year, but was unable to ride him in the Melbourne Cup due to a prior committment to Mount Athos.

It was a happy bunch of owners when Craig confirmed for both Cups this time around, his big race experience will give the horse every chance this year.

Craig rode Dandino in his first serious work out at Werribee just two days ago, alongside stablemate Guest Of Honour. and was delighted after hopping off the ‘Black Beast’.

“I am delighted with Dandino this morning,” Craig said.

“This is the second time I have been on him since he arrived in Australia.”

“He’s getting his weight right, his coat is getting finer and shiny and I am thrilled with how he worked this morning.”

Dandino is scheduled to have his first Melbourne start this spring in the 2014 Caulfield Cup on Saturday 18th October 2014 at Caulfield and once again the Dandino Bar (renamed the ATB Bar this year) will be the place to be on Caulfield Cup day.

It doesn’t get much better in racing than having a runner in both the Caulfield & Melbourne Cups, but to have a live chance in both races once again, well we have Darren & Liz Dance and Australian Thoroughbred Bloodstock to thank for that.