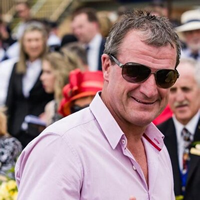 Ballarat trainer Darren Weir is having a year to remember and recently notched up his 50th metropolitan winner of the season on March 10th at Moonee Valley.

Victories to Duble Barrel Daisy and Gingerboy took Weir’s 2013/2014 season tally to 50, while the win of Siwa Lady in the Essendon Mazda 55 Second Challenge Heat 16 (955m) last night at the Valley has taken the hard working trainer to 51 wins on the Victoria Metropolitan Trainer Premiership, 13 wins clear of Peter Moody in second place

Weir has also notched up 95 wins in the country and has a commanding lead in the Victoria Country Trainer Premiership as well, with Peter Moody again in second place, some 23 winners behind Weir.

The Victoria Trainer Premiership sees Weir on top having amassed 146 wins for the 2013/2014 season, with Peter Moody next on 110, while Robbie Griffiths 67, Mick Price 64 and David Hayes 51 round out the top five places.

Weir has a big stable of horses in work at his state of the art Forest Lodge training complex in Ballarat and the hard working trainer has the knack of placing his horses in just the right race to give them their best chance to win.

In his current vein of form it will only be a matter of time before Darren Weir leads in another winner, especially at Moonee Valley on a Friday night, where his stable has had a great run of late.