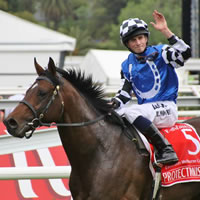 The Melbourne Cup Carnival’s hallmark event, the Emirates Melbourne Cup, attracted 100,794 racegoers to Flemington today to celebrate the ‘race that stops a nation™’.

The evergreen Red Cadeaux, ridden by Gerald Mosse and trained by Ed Dunlop, finished second for a heartbreaking third time in its fourth – and almost certainly final – start in the race.

“Flemington was at its best for the 154th running of the Emirates Melbourne Cup with perfect weather, exhilarating racing, fabulous fashion and entertainment attracting a strong crowd to the track for the illustrious race,” said Mr Sullivan.

Hundreds of beautifully dressed women competed in the Myer Fashions on the Field with Christine Spielmann, 28, from Holtze in the Northern Territory crowned the Women’s Racewear title for Emirates Melbourne Cup Day.

The VRC’s invitation-only Design Award was presented to Victorian Anthony Capon, 30, who showcased a black and white check-print on model Ellie Lemons with pink hair accentuated by a draped large bow on the right shoulder, Tony Bianco shoes and an Olga Berg clutch.

Metro reported that more than 52,910 racegoers travelled by train to Flemington.

Mr Sullivan extended the VRC’s sympathies to the connections of Admire Rakti, which passed away suddenly in its stall.

“The VRC has welcomed many international visitors who accept the challenge to win the race that stops a nation and is saddened that Admire Rakti’s campaign ended in this way,” Mr Sullivan said.

The 2014 Melbourne Cup Carnival will continue on Thursday with Crown Oaks Day, where the Fashions on the Field Victorian winner will be crowned with more than 65,000 expected for the Carnival’s ‘Ladies Day’.