Burrumbeet and its Cup 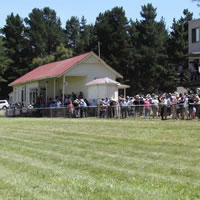 The iconic Burrumbeet racecourse will host the 124th running of the time-honoured Burrumbeet Cup on New Years Day with a large crowd expected to bring in the new year at the extremely popular country race meeting in Western Victoria.

The feature race of the day is the 2014 Scott Petroleum Burrumbeet Cup (1800m), which will be run as the last event on a seven race card.

Burrumbeet is home to the Burrumbeet Park & Windermere Racing Club, which boasts the longest-serving president of any race club in Australia, in Charlie Coghlan, who held the role for 49 years.

Charlie was also a valued committee member for 69 years and the on course betting ring was named in his honour in 2008, with the official opening of the Charles Coghlan Pavilion.

It’s worth noting that Melbourne gangster Squizzy Taylor was caught pick-pocketing at the Burrumbeet races in 1908 and was arrested and charged for the first time. He was only twenty-years-old.

Back in the mid 1940s crowds of around 25,000 people would flock to the course to celebrate the Burrumbeet Cup courtesy of a railway line that ran directly from Ballarat to the Burrumbeet racecourse. The railway line closed in 1948 due to declining traffic.

Nowadays the crowds are around 5,000 and the race club’s emphasis is on providing a family day out in a safe, relaxed, and fun atmosphere.

While the parents relax, the kids can enjoy a huge range of free activities in the Bendigo Bank Kids Zone, including face painting, a jumping castle, merry-go-round, rock climbing wall, animal farm, pony rides and Camp Australia activities and games.

A must for the kids is the Hannaford Seedmaster Kids ‘Dash for Cash’ down the home straight between races, with the youngsters competing for cash prizes and confectionary.

Unfortunately popular TVN race commentator Adam Olszanski will miss the next Burrumbeet Cup as he is required to call at Mornington on the same day. Adam has only missed one race meeting in the past 12 years and is a great supporter of the club.

The very capable Brendan Delaney will replace Adam for the 2014 Burrumbeet Cup meeting.

Entry to the Burrumbeet Cup is Adult $20, Concession $15 and children under 16 free when accompanied by an adult.

Gold Buses will be providing a return service from Ballarat’s Civic Hall car park for the racecourse at 11.45am, at a cost of $10 per person.