Ballarat gets back on track and racing’s the winner 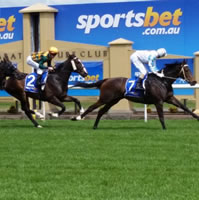 The Ballarat Turf finally opened their gates to the public once again when they held an exciting eight-race meeting at the newly upgraded Ballarat track today.

It was the first meeting for the club since Ballarat Cup Day last November.

Lengthy track renovations combined with a number of unexpected ongoing issues meant we had to wait until today to see racing again at arguably Western Victoria’s finest racecourse.

It was certainly worth the wait though, with the track racing superbly and the course itself in outstanding condition.

Lachlan McKenzie and the Ballarat Turf Club have done an exceptional job getting Sportsbet-Ballarat to where it is today, and it appears set to become the ‘Flemington’ of country racing.

It may have been a successful day for the Ballarat Turf Club and the local community in general, with the Ballarat track ticking all the right boxes, but from a racing viewpoint, visiting trainers and horses put the locals to the sword, winning all eight races, with Caulfield trainer Peter Moody snaring a double.

Luke Nolen had a terrific day riding a hat-trick of winners, while Chris Symons rode a double.

Ridden by Nicholas Hall, the son of High Chaparral finished strongly in the final 100m to win the Stateplan Maiden Plate (2200m) by 1/2 length from a gallant Raggety, who ran second, with Entirely Perfect one length away in third place in a time of 2:22.30.

Caught three wide during the race and hard ridden before the turn, Yendall settled Set Square for the run home where he quickly made ground in the last 200m to score a very good win by a neck from Home Run Hero, with a further 4 lengths away to Duck Dynasty in a time of 1:38.12.

The Street Cry mare was well back in the field approaching the turn but Nolen let her loose upon straightening and she quickly rounded up the leaders to score a convincing two and a half length victory in a time of 1:38.51 for the trip.

Debutante Arianne ran home nicely for second and looked a likely type, certainly one worth following.

Nolen had the Street Boss 4yo nicely placed in the run and he fought on strongly in the run to the line, defying a late challenge from late closer Dandog.

The third horse Gloray was almost 4 lengths away in third place in a time of 1:28.58.

Punters were urging Clemo on in the final stanza but Chris Symons guided the impressive Gold Bar to his second win from as many starts.

Chris Symons rode his second winner for the day when the Northern Meteor four-year-old finished too quickly for her rivals in the the Hygain F&M BM64 Handicap (1000m).

Sentfromthestars defeated Follow My Lead by half a length and it was quite a bunhced field as they crossed the line, with only 3.3 lengths between the first 13 horses as they passed the winning post.

Darren Weir 6yo Special Edition looked home inside the final 50m before the Sam Pritchard-Gordon trained Lord Da Vinci put in the big strides late to score a very good win in a time of 1:25.39.

Race 8: FIGHT TO THE LINE 1st: Peter Moody (Caulfield) Luke Nolen
The final race of the meeting was taken out by the Peter Moody & Luke Nolen combination once again with consistent gelding Fight To The Line who cam home strongly to grab a narrow victory in the Hygain Showcase BM78 Handicap (1200m).

Second placegetter Emerenta dashed clear in the fianl stages before the Moody galloper knuckled down under the urgings of Nolen to produce the goods when it mattered most.

The win gave Nolen a hat-trick of victories for the day and brought up a double for Moody.

The next meeting at Ballarat is on Thursday 23rd October 2014 and you can visit the Ballarat Turf Club for all ticketing & dining options.