A Star is Born as Amicus takes 2014 Thousand Guineas 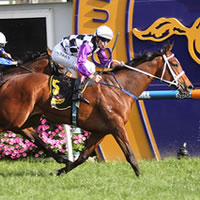 Chris Waller trained three-year-old Amicus elevated her rank as one of the most valuable fillies in Australia with a solid Group One win in Saturday’s $500,000 Thousand Guineas (1600m) at Caulfield.

After two luckless runs in Melbourne, the beautifully related Amicus led home a Magic Millions 1-2 in the fillies feature when he got home by a half length for a valuable success.

One of the star lots of the 2013 Magic Millions Gold Coast Yearling Sale, Amicus was purchased by her trainer Chris Waller for $500,000 from the draft of Tyreel Stud, acting as agent for her breeder, Makybe.

Waller said the filly had always shown great ability and it was great she was able to get some luck in the grand final of her spring campaign.

“Both of her runs (in Melbourne) have been very good,” Waller said. “She has had no luck.”

“It was a great ride from Hugh (Bowman). He got cover at the right time which was critical, it gave her a chance to relax.”

Waller said the filly was entered for the VRC Oaks but he would not be rushing into making a decision on whether he would press on the campaign to Flemington.

Amicus is raced by six partners – one of them Debbie Kepitis was over joyed in the mounting yard.

“I’ve had a lot of success with my family – but this is the first Group One win with my name in the racebook,” she said.

She is from the Melbourne winning and stakes performed El Moxie mare Gold Chant – a five time winning half sister to Starspangledbanner.

A Group One winner of the July Cup, Golden Jubilee Stakes, Oakleigh Plate and Caulfield Guineas, Starspangledbanner won seven races during a career that earned him over $2.3 million in earnings.