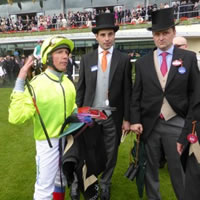 If Dandino crosses the line first in next Tuesday’s Melbourne Cup then it won’t only be his many Australian owners cheering loudly in the stands, so too will former New South Wales solicitor Stuart Boman, the UK Bloodstock agent who found him for Australian Thoroughbred Bloodstock.

Stuart got involved in racing through his family, in particular his father Ken who is a racing journalist.

He was bitten with the racing bug at a young age and started working at the sales with Gai Waterhouse during his school holidays, when he was just 13 years old.

For the past 5 years Stuart has worked at Blandford Bloodstock in the UK and specialises in purchasing horses in training for his clients.

The relationship with Australian Thoroughbred Bloodstock came about when he was contacted to help source horses for Darren and Liz Dance.

[blockquote author=”UK Bloodstock Agent Stuart Boman on Dandino”]He is a particularly striking individual who travels well in his races and has acceleration.[/blockquote]

Stuart was involved in the the process that resulted in last year’s Melbourne Cup third placegetter Jakkalberry being purchased for ATB and things have developed from there.

Before heading to Blandford to find potential Melbourne Cup winners for ATB, Stuart was with Darley as their Head Of European Marketing and Arrowfield Stud as their Racing Manager.

He is a graduate of the inaugural Darley Flying Start program.

I was fortunate enough to meet Stuart during Ascot week in June this year, when over there to watch Dandino finish second in the Hardwicke Stakes on the final day of the Royal Ascot carnival.

He is a very likeable, unassuming person, with a respectful approach to people, and it is no surprise to see him close deals to purchase horses such as Excelebration, Crackerjack King, Jakkalberry, Jet Away, Pakal and Rainbow Chic (HK) for his clients.

So who better to ask about how Dandino got to be where he is now, than the person who made it happen.

“I first spotted Dandino when he won a three-year-old handicap on English Derby Day in 2010, he backed this run up with a win at Royal Ascot and a close second in the Gordon Stakes (Gr 3) at Glorious Goodwood,” Stuart said.

“I made an offer to purchase him for a Hong Kong trainer at this stage which was unsuccessful but I established a rapport with his owners at the time, Elite Racing.”

“He is a particularly striking individual who travels well in his races and has acceleration.”

I then asked Stuart what made Dandino a good choice with a Melbourne Cup in mind.

“In my view he was a good candidate for Australia as he prefers firm ground.”

“He has a good cruising speed and can sustain a long sprint. He is far from being a slow stayer and he has speed and acceleration, attributes that are a necessity for Australia.”

“In addition to this, I liked his win & place strike rate and that he had successfully raced internationally.”

Marco Botti did a tremendous job with Jakkalberry last year for ATB and Stuart had no doubt he would thrive under the talented Newmarket based trainer.

“Considering the success that Marco has had, I felt he would be a horse that Marco Botti would train well.”

“He has the knack with keeping these older horses fresh and racing at their best around the world.”

Stuart was proven spot on there with Dandino racing in three countries in his first four starts for his new owners and winning the Grade 1 American St Leger on his way to a runner-up finish in the Group 1 Caulfield Cup last month, earning more than $675,000 in prizemoney for connections.

It’s no wonder Darren Dance seeks out Stuart Boman when looking for prospective international gallopers for his owners, as the canny UK based agent’s record speaks for itself.

In an industry where some crave recognition and glory for their feats, Stuart is one of the nice guys in racing and simply gets the job done.

As a part owner of Dandino, I can’t thank him enough for recommending this horse to Darren Dance for the Melbourne Cup, I guess this is one way.

Unfortunately, due to work commitments, Stuart and his lovely wife will not be able to make the trip to Australia to see Dandino run in the Melbourne Cup.

Our loss may prove to be someone else’s gain however, as while Dandino will be pounding the turf at Flemington on the first Tuesday in November, there’s a fair chance Stuart will have another classy galloper in his sights to make someone else’s dream come true!