Too late he cried as he waved his tired hooves 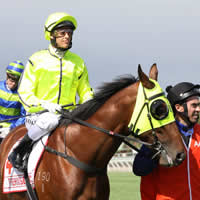 If the Victoria Derby was run over 2200m then Firehouse Rock would have given us owners the exhilaration of a lifetime on Saturday.

But it wasn’t to be, as the Group 1 Victoria Derby is run over 2500m, and it’s a war of attrition for the best young three-year-old stayers at Flemington, and our horse ran out of ammunition on the day.

Not the result we expected, or wanted, but the Victoria Derby trip was always going to be a query until he had actually done it.

Unfortunately for us owners, after looming into the race at the top of the straight he was immediately under pressure and started to labour, before weakening in the run home to finish 11th, beaten almost ten lengths on the line.

The 2500m of the Victoria Derby had found him out.

Not so for the promising Chris Waller trained Preferment, who relished the 2500m journey and hit the line in emphatic fashion to claim his maiden victory, the classic Victoria Derby at that.

The Sydney three-year-old put the writing on the wall at his past two starts, flying home over a mile at Warwick Farm early last month, before flashing home late to just miss behind Nozomi in the Geelong Classic.

Preferment was crying out for more ground, but he went around at very good odds in the Derby.

Hindsight is a wonderful thing in racing.

It is sure to be the first of many more wins for the talented Zabeel colt and all credit to the Chris Waller stable who hit back with a vengeance on Saturday.

They claimed the Group 3 Carbine Club Stakes with Kermadec in the first, and Waller also had the first two home in the Group 1 Coolmore Stakes with Brazen Beau & Delectation.

Let’s hope the run continues for the Waller team as we have a Fastnet Rock filly about to make her debut shortly, be great to kick off with a win.

As for Firehouse Rock, he failed to run out the distance on the day and may be better suited around 2000m or so, which gives him plenty of options moving forward.

He’s not even 3 yet really, and will head to the spelling paddock now for a well earned rest.

He’s got plenty of growing and maturing to do, and us owners are very excited about his future, especially under the guidance of David Hayes & Tom Dabernig at Lindsay Park.

It’s been a fantastic first prep for the horse and we are very much looking forward to the autumn ahead with our promising son of Fastnet Rock. 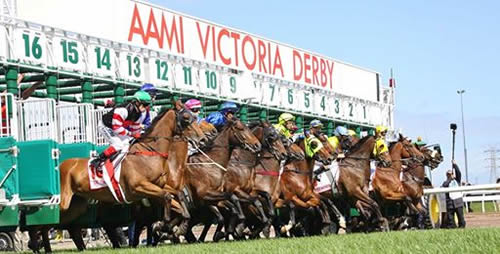 The 2014 AAMI Victoria Derby field jumps at Flemington with Firehouse Rock front and centre in the ATB fluro yellow colours.