Racehorse ownership is rewarding when it goes Onehundred Percent right 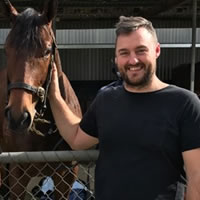 It seems like only yesterday that I witnessed Bennett Racing’s Nathan Bennett drop to one knee at picturesque Chantilly Racecourse in France to propose to the love of his life.

Fast forward to yesterday at Echuca races and witnesses tell me he had both feet off the ground, and both fists in the air, when his first ever racehorse purchase crossed the line first in the Murphy’s Turf & Landscaping 2YO Handicap (1109m).

The racehorse in question is now a winning two-year-old named Onehundred Percent, and more importantly, the impressive colt also has a 100% strike rate for connections.

It’s a long haul from Chantilly to Echuca and the journey has been a fruitful one for Nathan.

Down Geelong way he’s sometimes referred to as ‘The Torquay Kid’, although that was back in his younger days and a time when he had no need to drop to one knee.

Our paths first crossed when we had the pleasure to be involved together in a wonderful group of owners who all had a small piece of Australian Thoroughbred Bloodstock’s classy import Dandino.

Some unforgettable memories were created in the ‘Dandino Bar’ at Caulfield where a huge array have now become lifelong friends.

All of us have a common interest, and that is to be successful racehorse owners.

Nathan, bitten by the ownership bug, largely due to the Caulfield Cup & Melbourne Cup exploits of Dandino, took it a step further and decided search for his own horse to race with friends.

So, he enlisted the services of Group 1 winning trainer, Henry Dwyer, and Shadwell Farm’s canny young horse spotter, Phil Wells, and a plan was set in motion.

Together, they headed to the 2016 Inglis Ready 2 Race Sale at Newmarket in Sydney last October and found a lovely Hinchinbrook x True Emotions colt that fitted their purchase criteria one hundred percent.

It was a bold move by Nathan, but the trust and faith he had in Henry & Phil’s abilities to find the right horse was justified.

Fast forward from a balmy October day in Sydney to a chilly July day in Echuca, and the proof is in the pudding.

Onehundred Percent, trained by Henry Dwyer and ridden a treat by Ryan Maloney, delivered the goods.

A good eye, a good trainer, and a good horse, equals a great result, especially for those first time owners who had the faith and trust in Nathan to get them involved in a promising horse.

Many of these Bennett’s Racing owners will be experiencing the thrill of a lifetime, and good on them. It’s an experience that will keep them coming back for more.

Owning racehorses can be a very rewarding hobby, and also a costly one, but there’s nothing better than seeing your horse win and revelling in the rewards.

When the rewards are meeting great people who become lifelong friends, then racehorse ownership is at it’s most rewarding!

And as for Chantilly in France, dropping to one knee did the trick. Either that, or the massive big diamond ring Nathan placed on the lovely Erin’s finger.

Seems Erin was bitten by the mothership bug around the same period, because not long after, a well bred Nathan Bennett x Erin Bennett yearling, named Eden, forged her way into the world.

The impressive youngster is now 18 months old and thankfully has thrown to her mother.