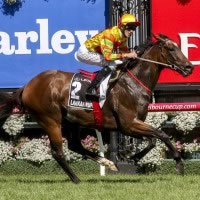 The world’s best thoroughbred sprinters will go head-to-head in 2015 in the coveted Global Sprint Challenge (GSC), which begins this Saturday 21st February at Flemington Racecourse in Melbourne.

Incorporating 10 Group 1 sprint races conducted across six nations, the 2015 GSC will commence with the Black Caviar Lightning (1000m) at Flemington this weekend and will conclude with the Longines Hong Kong Sprint (1200m) at Sha Tin in December.

First conducted in 2005, the GSC provides international recognition to its elite performers and a US$1 million bonus to the owners and trainer of any horse that wins a GSC race in three individual countries.

The bonus – which is yet to be claimed in 10 editions of the GSC – will be split 75 percent to the owners and 25 percent to the trainer, with the pool shared equally if more than one horse achieves the feat.

The Black Caviar Lightning – which was renamed in 2013 to honour Australia’s undefeated sprinting mare who won six GSC races, including three Lightnings – is the traditional launch pad for the GSC.

“Despite the outstanding quality of sprinters the world has seen in recent years – including the likes of Australia’s Black Caviar, Japan’s Lord Kanaloa and Singapore’s Rocket Man – the bonus for the Global Sprint Challenge is yet to be won so this year’s event provides an opportunity for a new champion to make history as the first to claim the prize,” GSC Committee Chairman, Leigh Jordon, said.

“The Global Sprint Challenge showcases the best thoroughbred sprinters from around the world and we’re hopeful this year’s Lightning winner will follow in the footsteps of Australian-trained globetrotters Black Caviar, Scenic Blast, Miss Andretti, Takeover Target and Choisir by going on to compete successfully on the world stage.”

“The Black Caviar Lightning has traditionally been an important springboard for Australian horses contesting later legs of the Global Sprint Challenge and, with connections of Brazen Beau and Deep Field already considering international campaigns later this year, Saturday’s race will command attention across the globe.”

Nick Smith, the Head of Communications and International Racing at Royal Ascot, said he had been in discussions with connections of both Brazen Beau and Deep Field about travelling to the UK later in the year.

“Brazen Beau looks to have all the attributes of a champion sprinter in waiting, with the pedigree of an impressive Coolmore win behind him,” Smith said.

“It was unfortunate for all concerned that Zoustar suffered a career-ending injury after travelling to England last year so hopefully his trainer Chris Waller can set the record straight this year with Brazen Beau.”

“It’s still early days but with interest from Brazen Beau and Deep Field, hopefully it’ll be back to normal with Australian representation in the feature sprints at Royal Ascot this year.”

The second event in the GSC will be conducted at Meydan Racecourse in the United Arab Emirates with the Dubai Golden Shaheen (1200m) to be run on Saturday 28th March – Dubai World Cup night.

The series then moves to Japan’s Chukyo Racecourse with the Takamatsunomiya Kinen (1200m) on 29 March, before the focus shifts to Singapore for the KrisFlyer International Sprint (1200m) on Sunday 17th May.

The United Kingdom hosts a trio of sprints in June and July with the King’s Stand Stakes (1000m) on Tuesday 16th June, the Diamond Jubilee Stakes (1200m) on Saturday 20th June, both at Royal Ascot, and the Darley July Cup (1200m) at Newmarket on Saturday 11th July.

The Challenge then returns to Japan for the Sprinters Stakes (1200m) on Sunday 14th October, before the second Australian leg, the Darley Classic (1200m), is held at Flemington on Saturday 7th November.

The final chance for sprinters to claim GSC glory comes on Sunday 13th December when Hong Kong wraps up the series with the Longines Hong Kong Sprint (1200m) at Sha Tin.