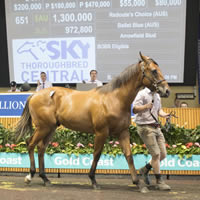 The colt joined Thursday’s top seller, the full brother to Sebring, at the top of the leaderboard for the auction when he was sold for $1.3 million.

Leading Sydney based bloodstock agent James Harron purchased the colt who was offered by Arrowfield Stud as Lot 651.

“He handled the whole sale like a real pro. I can’t wait to get him back to Peter’s to see what we’ve got.”

“We had him rated one of the top colts of the sale and he’s by a champion sire in Redoute’s Choice. We’d pegged him as a million dollar colt, but we just hope he didn’t go too far past it.”

“A beautiful horse with a great pedigree and beautiful physique. He fits in very well with what we’re trying to do,” Harron summed up.

The Redoute’s Choice colt is the third foal for the unraced Stravinsky mare Ballet Blue – a half sister to six stakes horses and from the family of Group One winner Imananabaa,

“This was a colt we really didn’t want to leave behind,” China Horse Club bloodstock agent Michael Wallace said. “The physical attributes he has are what we really look for in a horse.”

“It’s a global game and Australia has a very buoyant stallion market and if you get the right Snitzel colt you get really well paid at the end of it.”

Another lot to attract plenty of interest was Lot 607 – Milburn Creek’s I Am Invincible half brother to Group One winner and promising young sire Sizzling.

In the end it was South Australian trainer Tony McEvoy who secured the good looking bay colt with a $900,000 bid.

“I was hoping to get him for under a million,” McEvoy commented. “If we could have got him between six and eight hundred thousand I thought he would have been the buy of the sale.”

“He’s a quality horse. I was actually under bidder on his brother Sizzling. I loved Sizzling and we just missed him and I didn’t want to miss this colt.”

“I’m so excited about him, he’s a beautiful, beautiful colt,” McEvoy added.

So far the auction has seen almost $120 million traded on 574 lots sold at an increased average price of $208,824 and impressive clearance rate of 87 per cent.

“The numbers are all but the same as yesterday. The average is sitting around the $208,000 mark which we’re obviously very pleased with and the turnover is just wonderful.”

Check out all sale results here.