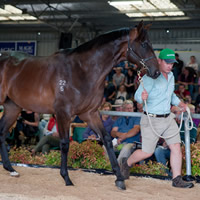 Offered early in the afternoon as Lot 6, the Armidale Stud consigned youngster was knocked down to Melbourne horseman Simon Zahra and will join Ellerton Zahra Racing at Flemington.

The colt is a half brother to three winners and is from the eleven time winning and stakes performed Savoire Vivre mare With Decorum.

Ellerton Zahra Racing rounded out the sale as leading buyer on spend with four purchases at an outlay of $245,000.

Three of the top four sellers on the day were on the account of the Whishaw family’s Armidale Stud – the farm which sold both of last night’s Magic Millions feature winners at Mowbray.

“It’s been a great couple of days,” Armidale’s Robyn Whishaw said. “We are very happy with our sale results and we enjoyed a great clearance.”

The top selling filly was the sister to last night’s Magic Millions Tasmanian 2YO Classic winner Our Long Sali, also offered by Armidale.

The Needs Further filly was purchased by Joe O’Neill’s Prime Thoroughbreds for $95,000 and will join the stables of her exciting sister with trainer Stuart Gandy.

Today’s sale returned a record gross of almost $2.8 million – a remarkable result considering the 2014 figure was $1 million. Today’s average price of $29,729 is up 24% on last year’s record. The clearance rate rounded out at 74%.

“To have a sale that has produced a record gross and average is a phenomenal result for the Tasmanian breeders and vendors,” Magic Millions Managing Director Barry Bowditch said.

“Credit to our vendors, over recent years their product and presentation has gone to another level.”

“It was great to see so many familiar faces from the mainland participating at the sale led by the likes of Ellerton Zahra Racing and Australian Bloodstock.”

“Although we are disappointed with the clearance rate, the overall result is unprecedented for the Tasmanian industry.”

“We thank Tasracing for their continued support and we look forward to the new TASBRED incentive scheme taking shape and rewarding those who support local breeders,” Bowditch added.

To view the sale results or to make an offer on a passed in lot click here.

The focus of the Australian thoroughbred industry now switches west with the Magic Millions Perth Yearling Sale to be held on Monday and Tuesday at Belmont Park.