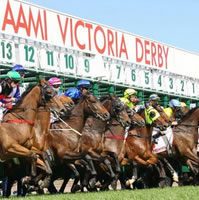 There was also plenty of action off the track with many celebrities joining the tens of thousands who braved inclement weather at Australia’s most famous racecourse.

The popular Birdcage Enclosure was home to a host of celebrities including Chris Hemsworth at Johnnie Walker, the Madden brothers in the Swisse marquee and the Lavazza marquee saw Solange Knowles as a guest with Margherita Maccapani Missoni, heiress to the Missoni fashion house, who wore a stunning crown of fresh flowers.

“Strong crowds, exceptional racing, and happy patrons are exactly what is desired for day one of the country’s most anticipated week of racing,” Mr Sullivan said.

“While the weather left a little to be desired, the racing certainly did not and we look forward to the improved forecast for the rest of the Carnival.”

Metro reported it transported 43,636 patrons to Flemington Racecourse by rail.

In what is arguably the most prestigious racing day of the year, the other Group 1 races were taken out by Brazen Beau in the Coolmore Stud Stakes, Happy Trails in the Longines Mackinnon Stakes and Bonaria in the Myer Classic.

The fashion stakes rivalled the on-course action with Myer Fashions on the Field for both women and men.

Brodie Worell took the Women’s Racewear Derby Day crown in a beautiful full skirted Tony Maticevski dress and abstract Felicity Northeast Millinery headpiece, and will compete with the eventual winners from Emirates Melbourne Cup Day and Crown Oaks Day to be titled the Victorian winner and go into the National Final.

The VRC is expecting more than 100,000 people and a perfect spring day for the running of the 154th Emirates Melbourne Cup on Tuesday.