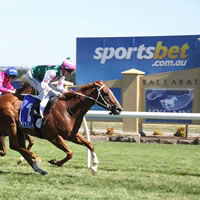 Consistent 6yo Mr Journeyman made it win number three for the year for the Ballarat stables of Simon Morrish when he proved too strong in the Hygain Showcase BM70 Handicap (1600) at Sportsbet-Ballarat today.

The locally trained gelding continued a rich vein of form on the provincial circuit, having won a Ballarat BM78 race and the Camperdown Cup last month, before finishing a close-up seventh at Moonee Valley last time out.

He returned to the winner’s list today courtesy of a telling Mark Zahra ride.

After being wide early, Zahra allowed the 6yo to stride up into second place behind the leader Steep, where he enjoyed a lovely run in transit until the turn.

Approaching the bend Zahra stoked Mr Journeyman up to make his run and he set out after Steep, who found plenty entering the straight, kicking clear in the run home.

Zahra had to pull out all stops on Mr Journeyman under his big weight of 62 kilograms and the son of Brief Truce kicked into gear in the final stanza, finishing strongly to win by 0.5 lengths over Steep, who held on for second, while Rich River hit the line nicely for third.

The Morrish stable managed a second placing earlier in the day when She Says So was gallant in defeat behind the David & Coral Leek trained Black Chavalier in the Racing.com Maiden Plate (2200m).

Still a maiden, the consistent mare has finished third in her last three starts over the 2200m distance at Ballarat, with a fourth placing over the same trip at Hamilton two starts ago sandwiched in between.

It was the seventh runner-up finish from 13 career starts for the honest 4yo and her maiden victory is not far away.

Keep an eye out for any Simon Morrish runners at next Thursday’s Ballarat Turf Club meeting at Sportsbet-Ballarat racecourse on February 26th 2015.

The Morrish stable is ticking along nicely at the moment, especally at Ballarat, with a number of runners getting into the money on home turf in recent times, including Melodramatic and Ha Long Bay. 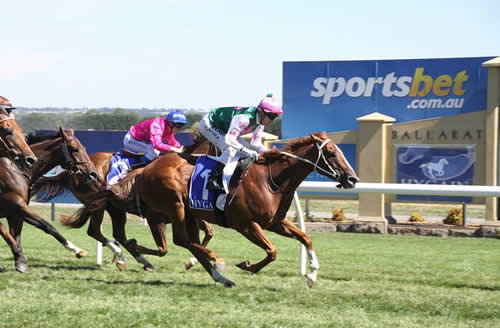