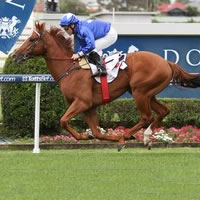 Brisbane youngsters Wicked Intent and Flamenco confirmed their places in the field for the $2 million Jeep Magic Millions 2YO Classic on Saturday 10th January 2015 with impressive stakes races victories on Saturday.

Wicked Intent retained his place as favourite for the rich juvenile feature when he scored an arrogant win in the listed Phelan Ready Stakes at Doomben.

A $16,000 Magic Millions Gold Coast March Yearling Sale purchase for Munce Racing from Oaklands Stud, Wicked Intent was sent out the odds on favourite after two impressive wins from as many starts.

Successful at 1000 and 1200 metres, Tell’em it’s Easy is a three quarter sister to stakes placegetters Rocklet and Vocalic.

Promising filly Flamenco made the best possible start to her career when she scored an impressive win in the listed Calaway Gal Stakes around 30 minutes later.

A daughter of Sequalo, Flamenco edged out Flamenco Girl in a thrilling finish to the feature fillies contest.

Flamenco is therefore a three quarter sister to the Flemington stakes winning and $274,000 plus earner Holding, a winner of 10 races up to 1200 metres for Prime Thoroughbreds.

Soldi Domani proved his status as one of Queensland’s smartest three-year-olds when he scored an emphatic win in yesterday’s listed Gold Edition Stakes (1200m) at Doomben.

A $52,500 purchase for owner Craig Morrissey at the Magic Millions 2YOs in Training Sale from the Waylon J Stud draft, Soldi Domani will most likely head to the Vo Rogue Plate before a break.

She in turn is from an unraced Highest Honor full sister to international stakes winner Parthe. The family further back takes in fellow international stars Persepolis, Pont D’or, Redoutable, Vayrann and Chaddleworth.

Meanwhile, quality galloper Hopfgarten made it four stakes wins on the Doomben card on Saturday for Magic Millions graduates when he dashed away for a 3.3 length success in the Brisbane Handicap (1600m).

The Mossman gelding will most likely have his next run in the Bernborough Handicap according to trainer Rob Heathcote.

Hopfgarten like Heathcote’s stable star Buffering is a son of Mossman. He is one of just two named foals for his dam, the unraced O’Reilly mare Black Tourmaline.

Black Tourmaline is from a half sister to Ipswich Cup winner Forest Jim and fellow stakes performer and 13 time winner Juerga. Hopfgarten’s fourth dam is none other than Leilani.