I Am Invincible colt sells for $2 Million on Day Two 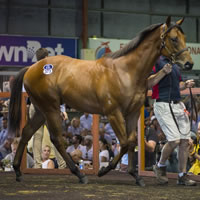 A colt by leading Hunter Valley stallion I Am Invincible became the highest selling lot in ten years at the Magic Millions Gold Coast Yearling Sale when he sold for $2 million on Day Two on Thursday.

Consigned by Yarraman Park Stud, the colt was the subject of fierce interest and in the end it was Reg Inglis, Jon Kelly and Paul Frampton who snapped up the colt – outlasting Boomer Bloodstock’s Craig Rounsefell.

The colt is the second foal for the Morphettville Guineas winner Tai Tai Tess, a Magic Albert mare who was sold through the same sale. The mare’s first runner is a winner this season.

Kelly, representing the buyers, said he was thrilled to secure his prized pick of the sale and wasn’t surprised he’d have to bid so high to get him.

“You couldn’t find any fault with him,” the American based buyer said. “He has a great walk – he’s proportional, he vets out perfectly.”

“The breeders have done a wonderful job,” Kelly added. “You can see it in him that he’s a quality horse.”

“There’s a lot of other good horses here, but in our estimation he was the best. This is the thrill of a lifetime.”

Arthur Mitchell of Yarraman Park Stud said the colt was the highest selling I Am Invincible yearling ever – eclipsing the previous record by some $400,000.

“We’re over the moon,” a delighted Mitchell said. “We weren’t expecting him to bring that much money but he was a lovely colt.”

“When the stand out colts get in the ring and the right boys are on them, they want to buy them,” Mitchell added.

“It’s great for the sire and the staff have worked really hard, so I’m rapt for them. It’s a happy result all round.”

There were more fireworks late in the afternoon when another group of buyers joined forces to secure Sizzling’s full brother for $1.6 million.

Yuesheng Zhang of Yulong Investments was able to outbid Spendthrift Farm to secure the much admired colt from the draft of Milburn Creek.

The Snitzel colt was purchased by Yulong in conjunction with Phoenix Thoroughbreds, Aquis Farm and Ciaron Maher Bloodstock.

“Snitzel is probably the hottest sire in the country,” a thrilled Ciaron Maher said. “He’s got a great family and hopefully he can become a Group One winner and get him into the breeding barn.”

“Let’s hope he’s as good as the brother, or even better,” Maher added.

The good looking bay or grey filly is by the former Horse of the Year and now hottest young sire in Japan.

Today’s hot selling helped push the overall sale gross so far to over $89.6 million – over $10 million more than at the same stage last year.

The average price tonight sits at $226,848 – a sharp rise from twelve months ago, while the clearance rate has soared to over 86.4 per cent.

“It would have to be one of the best days of trade we’ve had,” Magic Millions Bloodstock Manager and incoming Managing Director Barry Bowditch said.

“From start to finish today it was a great vibe. There’s so many people here trying to get into a horse. I know there’s lots of people who haven’t been able to buy a horse yet.”

“The opportunity is out there. The market is deep and I think there is still a lot of value out there. There’s still plenty of horses to be bought at the middle and lower end of the market,” Bowditch added.

Visit the Magic Millions website to view the results of the sale so far and to make an offer on a passed in lot.

(ranked by total spend for sale)