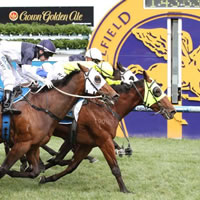 Promising Australian Throughbred Bloodstock colt Firehouse Rock rewarded his connections with more than $170,000 in prizemoney after winning The Inglis Ready2Race Sale Bonus (1700m) at Caulfield on Saturday, including a $100,000 Inglis Race Series Bonus.

In just his third race start, following placings at Geelong and Bendigo, the David Hayes and Tom Dabernig trained three-year-old certainly appreciated the step up in distance from his last start.

Firehouse Rock settled just off the pace in the run and jockey Nick Hall allowed him to gain momentum as they rounded the home turn.

After taking a few strides to find his mojo, the Fastnet Rock colt hit the front inside the 100 metre mark and defied all challengers in the run home, recording a determined victory over Hawking and War Point.

ATB’s Darren Dance was delighted with the victory.

“He was an expensive yearling that we purchased with McKeever Bloodstock at the 2013 Inglis Premier Yearling Sale and we’re delighted to get some great prizemoney back after just three starts.”

“It’s fantastic for our owners too, especially with the horse likely to head on to the Derby now.”

“It doesn’t get much better than Derby Day at Flemington, and to have a posible Derby starter is very exciting for our owners.”

As a part owner of Firehouse Rock we are very excited about his win on Saturday and very much looking forward to his next outing at Flemington.