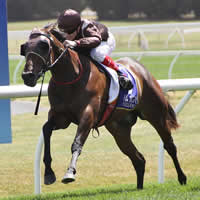 Carriages (pictured) and Murt the Flirt are set to chase more Magic Millions riches after they scored impressive wins in feature races at Ballarat on Saturday.

The Gai Waterhouse trained Carriages led her rivals a merry dash in the $200,000 Magic Millions Ballarat 2YO Clockwise Classic (1000m) and booked her place in the field for the $2 million JEEP Magic Millions 2YO Classic on January 10.

Sent to the front at the start by Craig Williams, Carriages held out the hot favourite and recent Maribyrnong Plate winner Prompt Return to win by two lengths.

Gold Coast based part owner David Henderson was all smiles after the race and dared to dream about winning his city’s most famous race.

“This is my first time to Ballarat and the horse got the job done – it’s a big thrill.”

“We’ve had a great association with Magic Millions and it’s great to chase these races.”

“She ran in Sydney a couple of weeks ago and we thought she would just win. She got beaten and we were a bit flat but Gai pumped us up and pushed us to come down here and she’s got the job done.”

“It was a good ride and she’s a really smart little filly,” Henderson added.

Carriages was purchased by Round Table Racing in partnership with James Harron for $110,000 at January’s Gold Coast Yearling Sale from the draft of Yarraman Park Stud.

She was prepped for Saturday’s Clockwise Classic with a strong debut third when taken on throughout in a gutsy effort.

Carriages is the first winner for Fastnet Rock’s group winning son Hinchinbrook – a half brother to proven sire star Snitzel.

She is out of the lightly raced and American placed Forest Wildcat mare Simply Enchanting – a half sister to international stakes winners Shaniko and Silky Smooth.

The latest yearling from Simply Enchanting, a cracking colt by last season’s champion freshman sire I Am Invincible will go under the hammer at January’s 2015 Magic Millions Gold Coast Yearling Sale.

The colt, bay in colour, is catalogued as Lot 611 and he will be presented by Yarraman Park Stud early during the fourth session of the sale on Saturday January 10, following the multi million dollar Magic Millions raceday.

Meanwhile, Murt the Flirt will be set for the $1 million Gold Coast Magic Millions 3YO Guineas (1400m) in January after an impressive debut win in Saturday’s $100,000 Magic Millions Ballarat 3YO Classic (1000m).

Prepared by Brendan McCarthy, Murt the Flirt showed a blistering turn of foot in the straight under Chris Symons to reel in the leaders, race clear and then hold out his rivals for a brilliant win.

“You don’t get the feeling of many horses going into a race and being really confident but today was one of those days where I thought we could go into the race confident.”

“The horse has always shown plenty and I thought we might have a class edge on them,” McCarthy added.

Murt the Flirt is the first named foal for the unraced Taimazov mare Love Attention – a daughter of the city winning Kenmare mare Party Miss.

Loves Attention is a half sister to five winners including Written Tycoon, the Group Two winning Iglesia galloper who is best known these days as a top sire with stakes winners including Rich Enuff, Howmuchdoyouloveme, Trump, It is Written, Grand Tycoon and Written Up.

Murt the Flirt was originally purchased by Ampulla Lodge for $22,000 from the Patinack Farm draft at the 2012 Magic Millions National Weanling Sale on the Gold Coast.

He was then offered at the 2013 Adelaide Yearling Sale but was passed in for $28,000, just shy of his reserve.

The team from Ampulla retained the handsome galloper and a large ownership group who now race him were in raptures after his debut win.

Visit our 2014 Ballarat Cup day wrap for all Magic Millions results at Ballarat.