Build up to 2014 Clockwise Classic at Ballarat gaining momentum 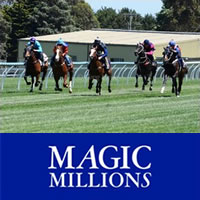 The build up to Saturday week’s $200,000 Magic Millions Ballarat 2YO Clockwise Classic continued on Tuesday afternoon with a jump out held at Ballarat in Western Victoria.

Five youngsters competed in the 800m heat and all were given the green light by stewards to contest Victoria’s most unique race on Saturday 22nd November 2014 at Ballarat racecourse on Ballarat Cup day.

The Patrick Payne trained Atalanta Miss, with Jordan Childs in the saddle, edged out Mick Price’s Eclat to win the heat narrowly.

Atalanta Miss, a daughter of Not a Single Doubt, is a Prime Thoroughbreds syndication who finished solidly to win her only run at Morphettville on October 4th.

Eclat (Beneteau) looked to possess above average ability with a solid effort to finish less than a head behind Atalanta Miss.

Tuesday’s heat was the second held for local youngsters to qualify for the Clockwise Classic.

Connections are reminded that entries for the Clockwise Classic, along with the $100,000 Magic Millions Ballarat 3YO Classic, close 12 noon (AEDT) on Monday 17th November 2014.

Both races are restricted to horses offered at Magic Millions Yearling Sales which are nominated to the Race Series.

2YOs which have raced or trialled in the clockwise direction in NSW or QLD are not required to jump out at Ballarat to nominate for the Clockwise Classic.

Trainers have the opportunity to win big on November 22nd.

Should any trainer win both Magic Millions features at Ballarat they will scoop a $12,500 Trainers Bonus – comprising a $5,000 Hygain Feed Voucher, complimentary VOBIS Gold and Magic Millions Race Series Nominations and a trip to the 2015 Gold Coast Yearling Sale.

Trainers and owners are also reminded of important upcoming deadlines for the $4.7m Jeep Magic Millions Raceday on the Gold Coast on Saturday 10th January 2015.

All other six races on the program

For eligibility or general questions in regards to the Magic Millions Race Series please contact Cassandra Simmonds on (07) 5504 1220 or via email here .