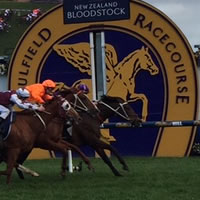 Star galloper Boban added another feature to his brilliant record when he stormed home on the inside of runners to win Saturday’s Group 1 Memsie Stakes (1400m) at Caulfield.

Back and on the inside of runners for much of the race, the outstanding middle distance performer came with a strong burst under Glyn Schofield to win.

Schofield was all praise for Boban after the pair combined for a fifth Group One victory.

“I didn’t think I was going to quite get there,” Schofield revealed.

“The last 100 metres he really lifted and he won the race in the last 100 when he saw the winning post.”

“He has a strong finish on him and he is explosive. It’s quite dynamic to ride him when he flashes home as strong as he does and obviously to do it at the top level is so exciting.”

“He’s racking them up thick and fast now. He seemed to have lost his form about about a year ago but he’s right back to his best now.”

“They are a great bunch of owners in Boban. They love their racing and most importantly they love their winning more sweetly than anything else.”

A son of former champion racehorse Bernardini, Boban was bred by Tony Thomas of Greendale Pastoral in Queensland and sold through the draft of Millbrook, operated by his son David.

He was presented at the 2011 Magic Millions Gold Coast Yearling Sale and knocked down for $100,000 to the bid of the BBA.

Prepared by champion Sydney based trainer Chris Waller, Boban is from the Group One winning Kenmare mare Kenbelle – a half sister to three stakes performers.

His previous four wins at racing’s elite level came in the Epsom Handicap, Emirates Stakes, Chipping Norton Stakes and Doomben 10,000 – the latter in his most recent campaign.