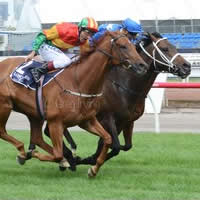 The sale regarded by many as the best value auction in the Southern Hemisphere commences tomorrow night.

The 2015 Magic Millions Adelaide Yearling Sale will give buyers the opportunity to find their next racetrack star when the first of three days of selling commences on Monday evening.

Lot 1 will enter the ring at 6pm (SA time) on Monday and be the first of 101 lots to go under the hammer following the running of the Adelaide Cup and Magic Millions Adelaide 2YO Classic at the adjacent Morphettville Racecourse.

Day Two (Lots 102-290 and Day Three (Lots 291-443) on Tuesday and Wednesday respectively from 10am will complete the auction which is renowned for both quality and value.

The Adelaide Yearling Sale was the only auction in the world to supply multiple Group One winners during the 2014 Melbourne Cup Carnival at Flemington with the likes of Happy Trails and Hucklebuck leading the way.

Happy Trails has been a revelation for his connections and is a true South Australian product.

By Cornerstone Stud’s Good Journey, Happy Trails was bred by South Aussies Brenton and Liz Parker and sold through the Mill Park draft at Morphettville for $11,000.

Paul Beshara purchased the chestnut star on behalf of Adelaide’s Dickmann family and with a swag of feature wins, including an Emirates, Makybe Diva and Mackinnon Stakes on his resume he has become one of Australia’s most popular racehorses.

Recently the outstanding galloper was crowned the South Australian Thoroughbred Breeders Horse of the Year for the most recent calendar year – a fitting award for a great ambassador for the local industry.

A winner of November’s Emirates Stakes, Hucklebuck has already earned over $1 million and will be chasing more riches in Group One features over the coming months.

Another great flagbearer for the Adelaide Sale is Deiheros. A $6,500 bargain buy for Kennewell Racing from the Bowness Stud draft, Deiheros shot to prominence by winning last year’s Magic Millions Adelaide 2YO Classic by a wide margin.

He rose to another level earlier this year when he scored a dashing win in the $1 million Gold Coast Magic Millions 3YO Guineas at the Gold Coast giving trainer Lloyd Kennewell, his father Gary and owner Luke Koumi plenty to celebrate in the Queensland sunshine.

That trio of gallopers alone – Deiheros, Happy Trails and Hucklebuck – were purchased for a total of $67,500 and as it stands they have already won their connections over $4.68 million.

To view the catalogue for the 2015 Magic Millions Adelaide Yearling Sale click here.