Another day at the Burrumbeet office

It was a misty morning at Burrumbeet racecourse as the first sound of hooves made their way along the track for the first of 13 jumpouts put on by the Burrumbeet Park and Windermere Racing Club (BP & WRC).

The aroma of coffee in the air and the smell of sausages from the nearby barbecue awakens the nostrils with gluttonous excitement.

“No sausages for me!” says popular racehorse syndicator Darren Dance, preferring to stick with his rigid eating plan that will see him in prime condition when he dons the Top Hat & Tails of Royal Ascot next month in the UK.

As the onlookers gather for the opening heat, leading Victorian trainer Darren Weir can be seen making his way to his usual spot underneath the weathered race caller stand to watch his charges go around.

Weir is a great supporter of the club and always brings plenty of horses to the jumpouts, much to the delight of the committee.

The leading trainer doesn’t say much, but as the horses prepare to leave the gates he is focused on the job at hand.

Alongside him is right-hand man Jeremy Rogers, who is busily scribbling in a much travelled notebook.

They are a great team these two, producing 186 winners across the state for the 2013/2014 season to date, 68 in the city and 118 in the country, not to add a multitude of placings along the way.

Weir is long odds on to claim his first metropolitan title this season and here he is at the Burrumbeet racecourse on a chilly Tuesday morning, a long way from the bustling thoroughfare of city racing.

The generic ringtone of a mobile phone goes off just as the gates open and the voice of Darren Weir can be heard as horses hit the ground running.

“Hello,” Weir says, eyes firmly fixed on the track ahead.

Maybe it’s an owner wanting to know how his horse is going, or perhaps a jockey begging for a ride on an upcoming Weir winner.

It’s certainly not Darren Dance, who races a number of syndicated racehorses with Weir, because he’s up in the race caller stand with video camera in hand, ready to film the heat for his loyal band of owners. 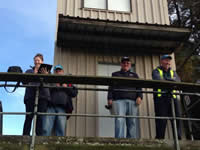 Dance and Weir are a pretty good team too, enjoying many successful racing moments together over the years, more recently with dual Group 1 winning mare Platelet.

It’s a fair drive from Warrnambool to Burrumbeet, a good 2 hours and more, but it’s a trip Williams makes on a regular basis to prepare his emerging team for the races, and he, along with Dance are great supporters of the club too.

The more aloof on course will notice Weir’s hard working video man & photographer Peter ‘Morgz’ Morganti blending into the background with camera at the ready, but the shutter of his trusty workhorse is a dead giveaway when shots need to be taken.

All eyes are now on the short Burrumbeet home straight as the small field thunders towards the finish line in a hurry.

Passing the winning post a big smile emanates from Williams while it’s simply a shake of the head from Weir, Dance is nonplussed.

Onlookers mingle for a moment to gather their thoughts, ready to make their way to the warmth of the nearby fire, no doubt contemplating a hot coffee and one of those enticing sausages.

For Weir and Williams, they go off to get ready for the next heat, while Dance does his best to avoid the smell of those calorie ridden snags.

“Darren do you want coffee and a sausage?” says Dance’s charming wife Liz, putting the thought of temptation in his head.

“Just a coffee thanks Liz,” Dance says with a wry smile.

All will gather again in around 15 minutes for the next heat where maybe it will be Weir smiling and Williams shaking his head, one down, 12 jumpouts to go.

The BP & WRC only host one race meeting a year, a ripping raceday on New Years Day, and the regular jumpouts held throughout the year with the neighbouring Ballarat Turf Club allows the committee a chance to mingle with the locals in a relaxed, inviting atmosphere.

The club receives great support from local and surrounding trainers, especially from the state’s leading trainer Darren Weir, who provides the majority of entries on jumpout day.

Burrumbeet will be holding their next jumpouts on Tuesday 3rd June 2014 and everyone is welcome.

Come along for an enjoyable morning with some fine country folk and interesting characters and there’s a fair chance you will find Darren Weir, Darren Dance and Matthew Williams in those same spots once again, ready for another day at the office.