How much is owning a Melbourne Cup runner worth? 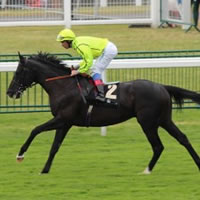 When Australian Thoroughbred Bloodstock’s Darren Dance asked me earlier this year if I wanted to get involved in his 2013 Melbourne Cup horse it didn’t take me very long to say “Yes Please!”

He then said he thought this horse could be better than Jakkalberry, the horse ATB syndicated last year who won in Chicago and Dubai plus finished a gallant third in the 2012 Melbourne Cup behind Green Moon.

Sure the share price was going to cost me a bit more than I would normally pay for a horse racing around metro or country Victoria, but the monthly fees were lower for a horse of this kind and how much is owning a Melbourne Cup runner worth anyway?

You can’t really put a price on owning a Melbourne Cup runner because you are paying for the whole journey to get there on that first Tuesday in November, and the highs and lows along the way.

At least I was getting involved in a horse that was fully qualified for the Caulfield & Melbourne Cups and barring any unforeseen circumstances he would line up in both races.

But first there is the bonus of racing in the UK and America to wet the appetite for running in high quality races.

A first-up 2nd in the Group 2 Jockey Club Stakes at Newmarket in the UK was followed by a runner-up finish in the Group 2 Hardwicke Stakes at Royal Ascot, where I was lucky enough to be on course with my fellow ATB owners to see him loom up to win before dying on his run in the final 50 metres.

How good is this I thought, and we are still 5 months away from the Melbourne Cup.

Next up was the American St Leger at Arlington racecourse in Chicago in August where he showed real fighting qualities to win against the odds, where his heart and will to win drove him through narrow openings in the straight to score a gutsy victory over 2700 metres.

Yes it was inferior opposition to what he would face at Flemington in the ‘race that stops a nation’ in November, but the horse doesn’t know that, and when it was time to find the line he found it like a good horse does.

Three starts for two seconds at Group 2 level in the UK and one win at Grade 1 level in the USA, not a bad start for a Melbourne Cup horse.

Oh, and we also won around $300,000 in prizemoney in those three starts. Not only is he providing great joy for his owners, he’s also providing a return on investment.

Next up is the Caulfield Cup and he is third favourite for the race and a great chance on his 2400 metre form, although try telling the so-called experts that.

I got involved in this Melbourne Cup horse with Darren & Liz Dance because I know first hand how hard they both work to ensure their owners receive the most rewarding ownership experience possible.

The horse is Dandino, and my fellow owners and I will be spending Caulfield Cup day in the Dandino Bar at Caulfield thanks to Darren Dance and Josh Rodder of the Melbourne Racing Club.

Owning and racing a racehorse shouldn’t be this much fun, but it always is with Australian Thoroughbred Bloodstock.

As for the highs and lows, there have only been highs since becoming a part owner of Dandino, and the Melbourne Cup is still 3 weeks away.