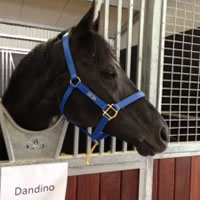 Melbourne Cup winning jockey Damien Oliver has been announced as the rider for Dandino in the 2013 Hong Kong Vase at Sha Tin on Sunday 8th December 2013 in Hong Kong.

English jockey Ryan Moore rode the Marco Botti trained stayer when a fast finishing 5th behind Fiorente in the 2013 Melbourne Cup at Flemington earlier this month.

Moore became a victim of circumstances in the run, after failing to seize opportunities when they presented themselves, and the horse was a mile back as they turned for home.

Upon straightening Dandino had little hope, but he ran home strongly to make up plenty of ground in the run to the line, finishing just 3.5 lengths behind the winner.

Australian Thoroughbred Bloodstock’s Darren Dance said the booking of Damien Oliver for the ride on Dandino was a positive one.

“After speaking with Marco we decided to go with either a Hong Kong or Australian rider for Hong Kong,” Dance said.

“Damien Oliver has been booked to ride him (Dandino) in Hong Kong and is in great form, having rode the Melbourne Cup winner in Fiorente.”

“He has a good record in Hong Kong and is just the type of experienced jockey we need for a race like the Hong Kong Vase.”

The 2400 metre distance of the Hong Kong Vase will be right up Dandino’s alley and he will be very hard to beat over this trip in Hong Kong.

Dandino will leave the Werribee Quarantine Centre on November 24th in preparation for Hong Kong.

Below are the 2013 Hong Kong Vase nominations for International race day.