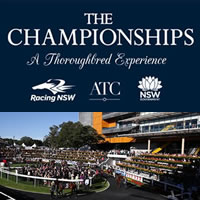 The 2014 Sydney autumn racing carnival is set to be a beauty next year with Racing NSW and the Australian Turf Club this week announcing an injection of $18 million dollars across two feature race days at Randwick to be known as ‘The Championships‘.

Comprising ten ‘Championship’ races including eight Group 1 events, The Championships will be held across two consecutive Saturdays, kicking off on Saturday 12th April and concluding on Saturday 19th April 2014.

The $4 million Group 1 Queen Elizabeth Stakes (2000m) highlights the second day of The Championships and is now the richest race over 2000 metres in the world.

The Championships is one of the richest racing carnivals in the world and has been designed to attract the best gallopers from Australia and around the world.

It’s a bold move by the ATC to take ‘Royal’ Randwick to the world and showcase Sydney racing in such a regal manner, especially with the feature race of The Championships being the Queen Elizabeth Stakes.

If the world’s best gallopers can find their way to Sydney next autumn to take on Australia’s best for the huge prizemoney on offer, then The Championships is a step in the right direction for Racing NSW and will provide a massive boost to racing in this country.