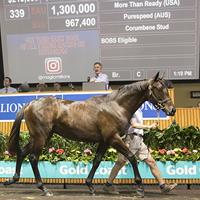 The full brother to Sebring was the star on a spirited day’s selling on Day Two of the 2017 Magic Millions Gold Coast Yearling Sale on Thursday.

Presented at the auction by Corumbene Stud, the stunning More Than Ready colt was the subject of fierce competition before selling to the bid of champion trainer Gai Waterhouse at $1.3 million.

Waterhouse who purchased the colt in conjunction with co-trainer Adrian Bott, Aquis Farm, Blue Sky Bloodstock and Dermot Farrington, was thrilled to secure the full brother to her former Golden Slipper winner Sebring.

The colt is the tenth foal of the grand producing Flying Spur mare Purespeed. As well as Sebring she is also the dam of Group Two winner Pureness and Group One performed Falkenberg.

“It was very thrilling indeed,” Waterhouse beamed. “Aquis Farm will be in him, John Singleton, the agent Dermot Farrington and his owners are coming into him as well as some owners from Vancouver.”

“Mr Altomonte has a great property Corumbene Stud at Dunedoo in New South Wales. I’ve had two Golden Slipper winners off the farm – and this could be the third one.”

“I saw him in the paddock and I said, George I’m not leaving the sale without him.”

“He’s a magical horse. He’s very masculine, he moves so freely and he’s got a sex appeal about him and I should know by now – I bought Sebring, Vancouver and Pierro from this sale – this is a magical sale.”

The brother to Sebring was one of three lots to sell for $1 million or more on a stunning day’s selling in front of another massive crowd.

Leading bloodstock agent Guy Mulcaster, the man who selected Winx from the 2013 edition of the sale, struck later in the afternoon when he purchased the Snitzel–Sabanci colt for $1.1 million.

Offered as lot 409 as a member of the Arrowfield Stud draft, the colt is the second foal of an Encosta de Lago blood sister to Tagus and half sister to Hong Kong star Green Birdie.

“He was the colt we really wanted,” Mulcaster said. “We set about working out what we were going to do and we had a good crack at him.”

“He’s going to be trained by Chris (Waller). He’s by Snitzel and he comes from a good family, so he was the colt we thought we had to pay for.”

Lot 419, the Medaglia d’Oro colt is from a city winning Lonhro three quarter sister to Denman and is from the first draft of homebreds from Aquis Farm.

“He’s a lovely colt,” Bahen said. “I saw him last Thursday when he first arrived and he took my eye immediately.”

“Obviously he was very popular. I think there were at least six people bidding on him at some point,” Bahen added.

“We had a fantastic start to the sale yesterday, but today it really did take off,” Magic Millions Managing Director Vin Cox said.

“The market consolidated, the clearance rate lifted up, the average is well up now and all the numbers and indicators are telling us it’s a very, very good sale.”

“We’ve got a good lot of horses to go under the hammer tomorrow and it should be pretty exciting to see how tomorrow goes and also Saturday night.”

Day Three of the Gold Coast Yearling Sale commences at 10am (Qld time) on Friday 13th January 2017 at the Magic Millions complex at Bundall.