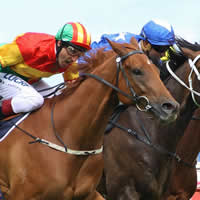 The son of Good Journey settled back in the field before coming with a perfectly timed run under Damien Oliver to nab Epsom Handicap winner He’s Your Man in the shadows of the post.

It was a deserved win for the South Australian bred, sold, owned and trained galloper after a string of unlucky efforts during the campaign including his last start effort in the Cox Plate.

“It was an outstanding run, a champions run,” a delighted trainer Paul Beshara said.

“He also got held up in the Turnbull, never saw daylight. I think he’s the best weight-for-age horse in Australia, if not the world.”

“He’s just a great, great horse. He’s so accommodating – he gives you his heart.”

Winning rider Damien Oliver said Happy Trails deserved his Mackinnon victory and he was thrilled to team up with the popular galloper for his third group one.

“It’s a great thrill to win a big race on Derby Day and it’s just fantastic for Paul and Erica and Pete, all the owners, wonderful!”

Happy Trails is one of racing’s great fairytale stories.

He was purchased by Paul Beshara for $11,000 from the 2009 Magic Millions Adelaide Yearling Sale at Morphettville.

He was bred by South Australian Thoroughbred Breeders’ President Brenton Parker and his wife Liz and sold through the Mill Park draft at the Adelaide auction.

As it stands with three Flemington Group One wins on his record, Happy Trails has earned over $2.8 million.

Royal Sash in turn is the dam of the stakes winners Sabatini and Vivi Veloce.

A half brother by Bernardini to Happy Trails is being prepared by Mill Park for the Parker family for January’s Gold Coast Yearling Sale.

The youngster is an athletic yearling who is sure to impress inspectors at the auction early in the new year.

A $50,000 purchase from the Squillani Park draft at the 2012 Adelaide Yearling Sale, Hucklebuck boosted his earnings to over $470,000 with his latest feature victory for Phillip Stokes.