Is Back to Back on Menu for Platelet? 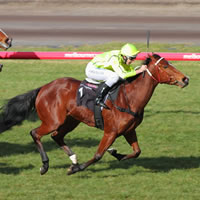 Australian Thoroughbred Bloodstock’s million dollar mare Platelet faces a tough challenge tomorrow to make it back to back Goodwood wins after drawing barrier 17 in the Group 1 feature sprint in Adelaide.

A capacity field of 20 runners plus two emergencies has assembled for the $500,000 Group 1 Goodwood (1200m) at the Morphettville racecourse, one of five exciting group races to be held on the final day of the Adelaide autumn racing carnival.

Platelet, a winner of nine races and more than $1.2 million in prizemoney, showed a tremendous turn of foot to win last year’s Goodwood and is arguably racing in better form this campaign as she gets set to defend her crown.

She resumed with an easy Moonee Valley sprint win in Melbourne before heading over to Adelaide to contest the Group 3 R.N. Irwin Stakes and Group 1 Robert Sangster Stakes at Morphettville, finishing runner-up to the Gai Waterhouse trained Driefontein in both races.

A tardy start had her further back than initially planned at her most recent outing in the Sangster Stakes, a race she won in stylish fashion last year, but she ran home strongly from a long way back to finish just over one length from the winner.

Darren Dance, managing owner of Platelet, conceded the barrier draw is a concern, but he couldn’t be happier with his bonny mare heading into the race.

“It was all looking good for the Goodwood until she drew the 17 barrier,” Dance said.

“So she will be coming from the cark park and some of the favourites have drawn inside.”

“If the expected rain comes then there might be a few come out and the outside might be the place to be.”

“She always gives her best and they’ll know she’s in the race.”

The Goodwood is scheduled to run at 3.30pm local time and 4.00pm AEST Melbourne time.

About 30 minutes before Platelet attempts to defend her Goodwood crown in Adelaide, Darren Dance will have his eyes glued to a TV set to witness his exciting Lonhro mare Lonhspresso resume over 1100 metres at Flemington.

The 4yo has not raced since finishing unplaced in the Group 3 Heffernan Stakes at Caulfield last November and Dance admitted she had enjoyed the benefits of a well earned spell.

“We’ve given her a good break and a nice patient preparation,” Dance said.

“We were tempted to run her at Warrnambool last week in the Wangoom but we have big plans for her, which includes the Group 1 Tatt’s Tiara up in Queensland in June.”

Lonhspresso could have raced over in Adelaide with Platelet but Dance thought a slightly easier race in Melbourne would suit her more.

“We decided to kick her off at Flemington over 1100m in a slightly weaker race than she’s been running in.”

“We want to get a couple of runs under her belt before she reaches that peak level of fitness required to compete in a Group One race.”

It’s been a huge season for Australian Thoroughbred Bloodstock with 39 winners and 67 places around the country.

Things are about to get more exciting for Darren Dance and the team with international runners Kelinni, Dandino, Tac De Boistron and Seismos all set to fly the flag overseas in the next couple of months.