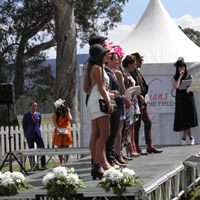 A beautiful spring day contributed to a crowd of approximately 6,000 race-goers descending on the Pyrenees region in Western Victoria on Saturday to enjoy one of country racing’s most iconic race days, Avoca Cup Day.

Set among the picturesque backdrop of the Pyrenees Ranges, patrons took advantage of the relaxed racing atmosphere to enjoy great food, wine and entertainment, including fashions on the field, and revelled in a plethora of fun activities for the whole family.

The Avoca Shire Turf Club was honoured to have the Premier of Victoria and Minister for Racing Denis Napthine in attendance on their biggest race day of the year.

The Christina Jeffery trained Scaredymac took out the 2014 Pyrenees Winemakers Avoca Cup (1860m), winding back the clock to score his first win in just under two years.

It was another successful day for the hard working committee and the next meeting for the Avoca Shire Turf Club is the very popular Pyrenees Christmas races on Saturday 6th December 2014.